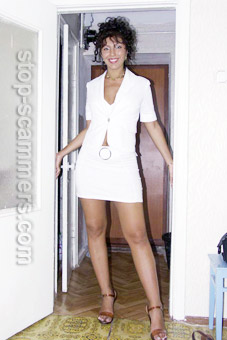 REPORT N1
John (New Zealand)
This woman emailed me without my knowledge of her whatsoever. She introduced herself by stating that she had paid for and obtained my email address from a dating agency in Russia, (an older email addres that I changed and have not used for some time now) On the first letter I was a little suspicious but I replied. On the second letter the wording in the letter was the same as what I had received several months ago from an female known as Irma Kurakova (Riga, Latvia, already listed on stopscammers), almost word for word. So I replied in order see what else would be replied to me. All the the letters received since then were all repeats of Irma's letters. Even to the point of having the same parents and the same cat called Micr. I was inclined to carry on the farce until such a time that I was asked for money but decided that this should be nipped in the bud so to speak.

I have written to you the letter and I hope you answer me. You probably ask whence I mail has taken your address electronic? I would like to answer your question at once. The firm which gave me your address is engaged in acquaintances and to me have told that they took your address in the Internet on base of acquaintances and I have decided to write to you the letter and to speak with you for this address I paid money and to me gave your address mail. Now I wanted to tell about myself slightly. First of all my name Marina Komarova. I live in the country Russia city of Cheboksary. You know where it is? I use the Internet for the first time. To me of 34 years and my birthday November, 15, 1969. And to me also the data and I have decided to write yours to you I hope you the good person. I write you from the Internet of cafe which Cheboksary - INTERNET refers to as. And I want to apologize for my very bad English language. A little more on itself I of 1
Read more