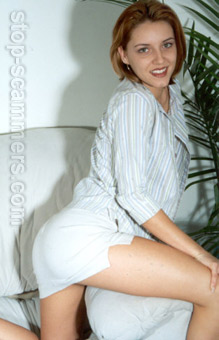 REPORT N1 (added on June, 3, 2010)
Il (Netherlands)
I was this ****** to pay her a ticket, after two years (!) of having chatted, she would come visit me. At first she told me she was in the USA, but later she had gone to Nigeria, where she stayed a while with a girlfriend. To make herself seem trustworthy, she had scanned her passport, but it must have been a fake one...
This scammer is called Tracey ***, but she called herself Linda, because her late father always called her Tracey, that was too painful for her...
After a lot of chatting, after two years of chatting, I thought i had no reason to distrust her. I bought her a ticket for the airline to visit me, and on purpose did not give her the money to buy the ticket herself. Strange, she did not seem very grateful for this! But after I done that, she said she had no money for the taxi to the airport. She asked for money at least 150 dollars for the taxi and for some food. So i send her some 200 dollars for the taxi and for some other stuff. She also spoke about a Basic Travel Allowance (BTA). When I googled this, I found out that this BTA did not exist. But she had me convinced she had wrongly got this info from others... I have checked her e-mail address on dating scam sites, but i never found anything about her on the internet. That made me wrongly trust her.
A few weeks later, the day after i send the money, I had a call from an unknown man, who claimed to be a doctor at the hospital, telling me that Tracey was sick and was taken into hospital. He asked if I was her fiancEe because she had said this so the the doctor. I denied this and said it was only a girlfriend with whom i had chatted. The guy had my phone-number and also my email-address, he supposedly got it from the scammer-girl. I then realized, I was scammed and stolen of my hard earned holiday pay! I then knew that i was deceived by a dating scammer organisation. But it was too late, my money was gone and the plane ticket (550 euro's!) was not refundable... The first thing I did after this strange call was changing my cell phone number and deleted her messenger profile...
I had first met the scammer via the paid dating msn site match. She/he (?) seems to be a very experienced scammer who has the ability to make people trust her during a long period of chatting. She chatted at the strangest times, also late in the evening, so I have always thought this could not be a dating scammer/ organisation. Isn't that trustworthy? She also send some "hot pics for my eyes only" and I was a man who fell into this trap...
Conclusion:
1) Caution! Even [i]paid dating sites have scammers on them!
2) This was a very hard and expensive learning experience for me.
3) I will never trust anyone on internet when i have not seen them in real life again.
4) I will never wire any money again to anyone who I have not met before in real life.
REPORT N2 (added on June, 8, 2010)
George (Netherlands)
Claims to be in London for a modelconference, needs cash to pay hotelbill. Is very reluctant to send photo's, cos she wants to trust you first DUH!!

Romance scam letter(s) from Tracy Cox to Il (Netherlands)
my name is coz linda williams my father is from uk amd my mum is from holland .
but my father has dead am presently in usa now .
i was born in 1982 my mum is in australia,i am a party photographer before and i was trained in new youk city as a food protector for a year which i have certificate for it and am willing to relocate with a lucky man who can take care of me and show me love again that will never deceive me because i have been deceive before by a guy that lead me to usa .
read from you soon linda
NOW TELL ME ABOUT YOU

Romance scam letter(s) from Tracy Cox to George (Netherlands)
Hi, I am Tina, I do came across your profile on the site Amateurmatch.com and its very lovely and Awesone. i will like to know more about a man like you, My name is Tina from Tampa Florida 26years old, single female Never Married and have No Kids, i am new on this online dating scene and i just wanted to know where this will lead to, im not a cam girl im a real lady looking for a serious long term relationship, im me back with you contact email address if you would like to know more about me, i am not a paying member or mail me on my yahoo tinapeterson210@yahoo.com hope to hear back from you asap .