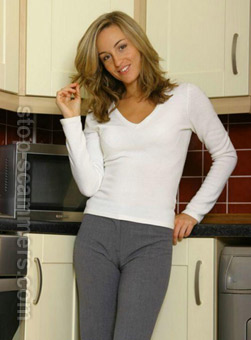 REPORT N1 (added on June, 16, 2010)
Peter (Australia)
This person did not post a photo online and claimed to be from Shepperton Victoria Australia, but when I started to chat with her she said she lives in Leeds in England and she was currently in Malaysia on Business. For about a week everything appeared normal, then as she said she was wrapping up her business, which she said was buying and selling things mostly makeups, and she was also a makeup artist herself, she did not know what she wanted to do now as she had free time on her hands, and suggested coming and scouting Australia as a possible option for her to expand her business as there was nothing holding her in Leeds. Arrangements had been made. then the drama started with customs holding things up and she was short on cash could I help her out. She seemed to go along with the suggestion that she contact the British consulate in K.L. and nothing more was said and things appeared to go smoothly up to the day prior to her departure,that was when I received a text message to say that she had been admitted to hospital, and was arranging for a Ashton Bradford to contact me with details. As details were sketchy at best I decided to contact the British Consulate in K.L. and that is when I was informed that this is an ongoing scam involving so called British subjects.
REPORT N2 (added on November, 9, 2010)
Stephen (Canada)
Ellie Morgan contacted me through online dating site Mate1.com. She introduced herself as an Austrian single woman and living with her girlfriend Rose in Lagos. She said that both her parents had died and she had no other family. We chatted for approx 10 days and exchanged photos via email, when she told me she'd fallen in love with me and wanted to come to Canada. She asked if I could split the airfare. She informed me that she couldn't purchase the ticket online in Nigeria, had to get it from an agent for cash. I told her that I wanted to call her and talk to her but claimed wouldn't be able to get through because of bad connections in Lagos and I'd just have to wait til we met to hear her voice. I suggested we video chat and she told me she had no way to do that and I should just trust her. She quickly came up with a total including all kinds of additional fees so I should send her approx 1600.00. She's expecting me to wire the money Monday Nov. 8th but I won't be sending it.
REPORT N3 (added on May, 12, 2011)
Jon (USA)
I initiated contact with the person I know as Sandra in January of 2011. It is May, 2011 and we are still talking. We met on the dating site cupid.com She said she was taking care of her sick mother in Idaho, who was sick with cancer. She said when her mother went to the hospital for treatment she would be able to see me if I sent her enough money for a ticket and I was ******, I did for $700 She also told me she was broke and unemployed. She seemed to know a lot about the town of Elk River where she was staying, I think that is why I trusted her. She had me use the name of Betty Knight when I sent the money. She recently relocated to Oklahoma with her aunt Patricia Aleen Grimes at 2305 Cypress Avenue, Enid Oklahoma where I mailed her two separate packages of $500 each. At this point in time I thought I was helping a friend until I received a miss call from 23470622543 and after some research it was a Nigerian phone number. I later checked some of the emails she sent me and found a Nigerian IP address. At this point she said she used the money to fly to London to meet the Lawyer handling her familys inheritance, for her. I'm still in contact and she is going to want me to buy her a ticket out of London. She is very good at what she/he does!
REPORT N4 (added on December, 17, 2011)
Wayne (USA)
Wow after just a short chat she asked me for a 1,000USD so I knew she was a scammer and tried to collect as much info as I could. Managed to get contact info for a partner in Texas. She said was her sister.
Name: Cynthia Horton
State: Texas
City: Leggett
Zipcode: 77350
As she wanted me to use Western Union and this Lady (her sisters) info to wire the money $1,000 When I ran the pics on stopscammers.com she came up as Elle Woods when I confronted her with this she said her ex had posted the pics and was scamming lonely men out of money...? Thinking there could be some truth to it I asked her to send me a pic of her touching her nose with her left index finger. When she refused and got mad I just filed this report. I''ll be adding the new pics and contact info.
REPORT N5 (added on June, 2, 2015)
Mart (Canada)
I think this is the same girl who introduced herself to me on Badoo as Joice age 37. I did not communicate with her for very long and deleted all her emails but I did find one picture in my computer.
Created: 2010-06-16    Last updated: 2021-09-24    Views: 1030