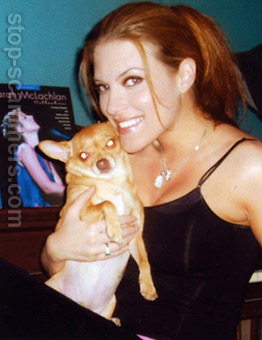 Emails from Susan Steven to Tom (Canada)
Hi,Just found your profile interesting and decided to send you a message my name is Susan am single never married .You really sound good on your profile and I think every woman will be dying to have a man like you and I am also wondering the reason why the ladies over there have made a man like you being alone.I am actually new on this dating site,I found it in my Junk mail as advertisement which I decided to give it a try and see what it has to offer but I can see this site has nothing really good.I have come in contact with some men and they were all asking me to send the **** pictures which is very bad.Am here looking for a life partner for a long term relationship and first we have to be friends to get to know more about each other and see what will happen next what about you ?Honestly this dating site is driving me crazy and I will be very much happy if you will like us to extend this conversation You can reach me directly and tell me more about urself at wsmile1001///at///yahoo///dot///com also chat with me directly online via ///yahoo // wsmile1001 make sure u get back to me on my ///at///yahoo///dot///com so i can sending more pics of me to you ok cos am getting my profile of now i join this site just cause of u so make sure you get back to me on my personal mail ///at///yahoo///dot///com and I will get back to you as soon as I receive your message.Looking forward to hear back from you soon,

My name is Jessica M Braun ,am Looking to meet a Honest and God fearing man,I just wanna let you Know more about myself...I am 30y/o and living in U.S.A with my step mum.I was having problems with my dad whom I lived with after his divorce with my mum. MY Dad works with Oil Contractors in UK and Europe including some parts of Asia. I worked with my father as his personal Auditor and we move around for his contracts wherever he is awarded.

My first boy friend, Victor Glashow, absconded with my dad's money which was kept with me after a completion of a contract in EAST London,UK. When my boy friend got absconded with the undisclosed sum of US dollars, this brought the first breakup between me and my dad, cos he thought, we have the deal together, but not knowing that I'm an innocent about this.until my dad passed away....

Then when I perceived all his behaviors of his newly gotten wife, i decided to leave United State to meet a friend in Sauth Africa whom I and my Dad met during our stay there for a contract with N.N.P.C. I left because my step mum was treating me bad and I later got to know about a contract my late dad executed In Sauth Africa .so I came down to take up the money from the contract.

Now, I'm in need of your help, have gotten the enough money to run myself when I get to USA, i want to come over to your end and stay with you for main time, I don't want to live here anymore, you know I'm a foreigner here and it
Read more