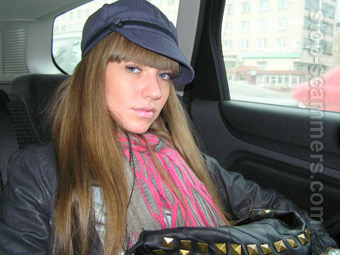 REPORT N1 (added on June, 22, 2010)
Janez (Austria)
Denunciation against marriage swindler (scammer lady),
Svetlana Efremova Sergeevna (29) = short SES from Cheboksary, Chuvashia, Russian Federation.
SES has deceived as hold good fiancee, promised to travel to Vienna for the purpose of marriage, demanded and received from Janez Kunc ? 1259. - . SES must be searched from Interpol as international internet swindler and adjudged for total sum of ? 5000.-
For taking evidence documents of SES: copies from passport, university diploma, accounts from Western Union, over 30 love letters, 50 photos with 2 children photos (5 and 10 years old) from Sosnovka orphan-asylum.
Some general dates and addresses from SES:
SES is born on 3. 8. 1981 in Sosnovka, passport 59 nr. 1469025, issued on 2. 5. 2008.
SES has Diploma as organisation manager, issued from State university of Cheboksary, registered nr. 13022 from 20. 3. 2004.
Last official short time address from SES in city Cheboksary: ulica Krasnoarmejskaja, house 120, flat nr. unknown.
SES internet address:
lifesunrize@gmail.com, passed ok; but her first giving address Lanasvet@rocketmail.com; and lovely797@mail.ru, are unavailable. SES lives mostly in Cheboksary, sometimes in Yoskar Ola and until last March ? in Moscow, pretended lied in coma in a first aid station of unknown hospital, because auto accident? In the meantime probably discharged?
Other important addresses: tourist agency TUR- TUR for insurance contract, Austrian visa and fly ticket till Vienna (cost together ? 790. - ) with guilty address: travel_russia@inbox.ru, tel. Nr. +798 770 299 52 in Cheboksary (local address unknown), but known is the name of contact lady: Mrs. Andwela or Angela. She has written me on 13. 4. 10 not over her firm TUR house agency- address, than in one direction operating address lovely797@mail.ru, I think with care, because I have threaten SES with Interpol.
It is rather suspicious that Mrs. Andwela replayed me rather seldom, when SES was for a long time (1 or 2 months) ill or absent. In the first time, before received money, she has written each day. Therefore is possible, that Mrs. Andwela could be ident with SES, because her english style and grammar mistakes of correspondence are the same. It is also possible, that Mrs. Andwela has bayed photos from SES and written the love letters in bad english herself.
SES would must came to me untill middle of February.
The last letter from SES was date with 23. 3. 10 with empty promises…
I wanted often to have a telephone number, but SES ignored it permanent. I cannot believe, that she has lost or been stolen her handy together with my money, which I sent her for trip to Vienna? look down the letters.
Important remarks for police and detective:
SES has probably not worked as manager, but as photo model or mannequin, or less probably as a bar girl, because she was very nice and remarkable person.
Although she has had enough money, but with avarice, wanted she with seduced love letters and photos from me reputedly more money twice time: 1./ on 19. 1. 10. ? 430, 50. After this sum was being stolen or lost, 2./ on 30.1. 10. ? 828 again, together ? 1259.- over Western Union., look at copies.
I accuse SES for the sake of swindle of love and marriage and psychically cruelty for altogether ? 5000.-
Why she could cached me?
After my divorced matrimony with two adult children, I was blocked and have needed nearly 10 years to stabilise myself for a new relation. Past summer I begun to search over internet my future partner, found some marriage institutes and complete their asks and tests without to pay a membership. Past October I received three contacts from be2. Because I a religious man, replayed the lady, which ended her letter with “God bless you”. I couldn’t have idea, that behind these angels face a scammer lady and professional swindler stacked.
Thank you very much for help.
With kind regards

I did a long pause, to that-that there was no possibility to come into the Internet and to answer you the letter.
I saw that you have written to me, and could not answer. But as I have a possibility I to you at once write.

I send a copy of my passport. There all my data are written.
Concerning your friend, let he does not worry.
I the truth am enamoured in you and to deceive you I do not gather.
I am actually, I do not deceive you.
About my God, about what public house there is a speech?????????
No! I go only to you! You hear, to you!!!!!!!!

I live not with the friend, and with the girlfriend.
At me in thoughts only you. More it is necessary nobody to me!!!!
I very much wish to be with you. Now I finish the letter. I look forward yours.

The whole. Yours Sveta

Hi. On holidays you I congratulate! I could not be on the Internet,
I laid in hospital! Forgive me, that I could not write to you!
Forgive please. I had a flu. To me it was very bad! Now I at home!!!
Also I can answer you letters every day. I send you a copy of my diploma.
I wait tomorrow for your letter. About love. Yours svetlana.
I think that in Februa
Read more