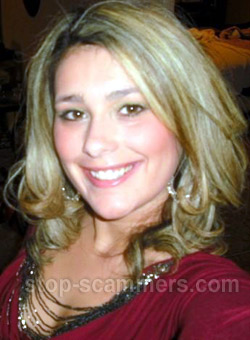 REPORT N1 (added on June, 23, 2010)
Peter (Australia)
This person who was on the site under the screen name of lisycam, and stated in her profile her name was Lisa Campbell, Contacted me about 3 to 4 weeks ago and we started to chat very slowly at first, she appeared reluctant to go very fast with the get to know you stage for about the first 10days, during this time she said that she was in the UK on business from her fashion store in New Jersey, where she has trendy fashions for both men and women. She eventually sent me an email explaining why she was wanting to take things slowly, and then shortly after said that she had to fly to Nigeria to buy more cloth and clothes. After she said she arrived in Nigeria she sent me some photos including one of her with her family. It was also about this time that it came out that her real name was as in her email address, Monalisa Bellone. She was the one who without any prompting told me that here birthday was coming up within the next couple of days. She had initially asked if i would buy her an outfit that she had seen over there for about $320 USD, I refused to send that amount of money and said that if she was really serious she would allow me to purchase her something if and when we actually met. Within a day or two of that conversation which was about a week ago, she began the I love you and cannot live without you routine and wanted to fly here to see me but only for a week. She even purchased the tickets herself, she at this point had not asked for any money from me nor had she suggested that we drop our profiles off the site as a show of committment, as others do. All seemed to be going well right up to the point where she was due to board the aircraft. About 2 hours after she was due to be on the aircraft to fly the first leg of her flight to Austalia, I received an email, saying that she had been attacked by armed robbers who had taken all her money and wrist watch, could I send the $2000 she needed to be able to leave the country to the Western Union office at the Airport in Abuja, as she was there waiting to catch the flight at 6am the next morning. I have ignored that email and have heard nothing since.
This person plays it completely differently to a lot of the other scammers in that she comes across as very reserved but will divulge some personal information, just enough to keep you interested and keep you coming back until the big sting at the end.

Emails from Monalisa Bellone to Peter (Australia)
Hello peter, how are you doing? fine i suppose, At the time I am writing this you will probably be in bed. i have been very busy and apologize for the delay in response.
Peter you seem very decent and cool to me and i must confess that i am impressed with the attention and affection you show to your parent, it only tells me how caring and responsible you are. I am still thinking of the best way to put this section into words as I feel you need to know me better, peter If I am in a relationship, unless there is obvious information to the contrary, I feel secure and loved.I expect the person I love to be honest and true to me. I don't feel the need to be checking up on them, as suspicious thoughts almost never cross my mind.I don't let past disappointments weigh too heavily in my expectations of future likelihood of success, I am committed to someone, I am rock solid. I never wonder about what I am missing or whether or not I should be with someone else in a different kind of life, Imagine how difficult and devastating it was for me to discover my EX cheated on me all the while, he lied about everything. he had a wife and 2 kids in Germany and made a fool of me for 3 years. Peter i am sorry but i really have to take this slowly i cant stand another heart break, that would probably **** me. i hope to hear from you soon

My dearest, you made me speechless for some minutes. The night I met you, I never imagined,that I'd
Read more