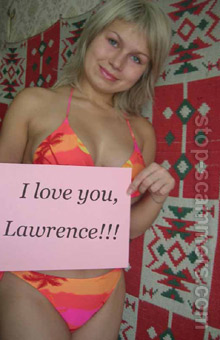 REPORT N1 (added on June, 25, 2010)
Lawrence (England)
I first met mariya on a dating site and two replies she gave me her email address of which she answered me with very long letters and many photos after her fifth letter she began to fall in love with me and told me she dont want to lose me and cant live without me she said she will arrive to me but needed money for the flights and visa and could i help her i said i dont like to send money to someone who ive neaver met but my heart ruled my head and i sent her 715 euros for the above she then asked me for travel insurance but i said no a week later told me her aunt had paid for her travel insurance but needed money for herself to come to me she phoned me on several occasions but broke down on the phone saying she needed 1200 euros to come to me otherwise the embassy wont let her out of the country i tried to confirm that without any joy i said i cant give her anymore money but she told me to pay 750 euros and her aunt will pay the rest but i again said no she told me she cancelled the flight twice but rebooked last friday on the 18th of june 2010 gave me flight details as well i lost approx 660 english pounds just want this so called person stopped from scamming anyone else.

Emails from Maria Goncharenko to Lawrence (England)
Hello Lawrence!!! I am very happy, that you have answered my letter. I to regret for a Small delay of my answer to you. In general I do not know that to Begin the letter. I Should inform concerning me. It is probable to describe About me it would be direct easier if I did not do it for the first Time. Excuse me for the disorder of words, it because I excite a It is a little, you see this my first acquaintance through the Internet. Time Has arrived to continue history concerning itself. I like to create a cosiness in the house. I am very good to cook food. Also very much it is pleasant to me To be occupied on sports meets meets, without it I feel not in shape. I love sports meets, meets from the childhood, I participated in Competitions to track and expose track and field athletics, and repeatedly won The awarded places. My age of 29 years. And you love sports meets, meets?
However, it has not for me a big value. It is important, that we Have with you mutual understanding. I live in a city of Cheboksary, here I was born also dews. It is very beautiful city. I live With mum and the daddy in apartment with two rooms. I live in a Separate room, I very much love it. In a life I very much The cheerful person, and at me is very responsible work. I am not absolute Well speak in English, but to write in me it gathers round many errors As you can see. My dream it to create a family with the correct person In the future. Not to do Leave my letter without
Read more