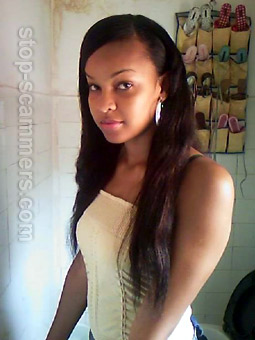 REPORT N1 (added on August, 20, 2010)
Dileep (India)
Same old story of rebels killing her parents and the only one alive and so on.
REPORT N2 (added on February, 6, 2012)
Harri (Finland)
This is traditional Nigerian 419 scam.
REPORT N3 (added on April, 13, 2012)
Musa (Japan)
She contacted me out of the blue via email.
REPORT N4 (added on August, 11, 2014)
Sandre (Saudi Arabia)
I received all of this documents and photos from one (1) of my sender in my e-mail . Her name is Bianca Lewis as what she narrated to me shes the daughter of Mr. Herbert Lewis. Her late father Herbert Lewis have Six Million Five Hundred Thousand US Dollar (US $ 6.5) deposited in BICICI Bank in Cote d' Ivoire. She want me to send her a money amounting One Thousand Nine Hundred Ninety Nine US Dollar (US $1,999) for the purpose by transfering of that fund to my account

Firstly I thank you for your reaction to my e-mail; inline with the message which I have sent to you.How are you over there in your country? I believe you are having a nice time and the atmosphere over there in your country is very nice today,mine is a little bit warm over here in Dakar Senegal.. My name is jenifer Domnic.I 'm 24 years from Ivory Coast in West Africa, 5.10ft tall, Fair in complexion,(never married before) and presently i am residing in the refugee camp here in Dakar as a result of the civil war that was fought in my country.My late father Dr alex Domnic was the managing director of Alexokans and Associates (Ltd) and he was the personal advicer to the former head of state before the rebels attacked our house one early morning and killed my mother and my father in cold blood.It was only me that is alive now and I managed to make my way to a near by country Senegal where i am living now in a refugee camp,and this computer is belonging to a reverend that has a church here in the camp.

I decided to contact you because of the urgency of my situation here, and after reading your profile. I don't have any relatives now whom i can go to, all my relatives ran away in the middle of the war the only person i have now is Reverend Fr. who is the Senior Priest here in (St.Louis Catholic Church) here in the camp he has been very nice to me since i came here but i am not living with him rather i am leaving in the women's ho
Read more

Emails from Jennifer Domnic to Harri (Finland)
My dear One,

Thank you for your message of concern and willingness. Reading from you urgently has given me joy and restore happiness to my soul once again. As I have told you in my previous message about my predicament, I have all the covering documents concerning the money and I want you to know that it only take one day for unknown to known.

My late father is a wealthy international businessman, he deal on Gold, Cocoa and Timber export, Am the only daughter of my parents, I lost my mother when i was 6 years, my father is all i have until he was poisoned by his brothers associated with my father's business partner due to his wealth, after the burial of my late father, life became **** to me because his brothers (my Uncles) claimed all my father's wealth and belongings as the tradition demands, according to the traditional of the land, if a man died without a son, even if the man have ten daughters all his wealth and belongings will be shared among his brothers and relatives, i believe this is the main reason while my father deposited the money without the knowledge of his brothers and made me the next of kin to the fund, My uncles planned to **** me thinking that i am going to revenge, that is why i ran out from the family house so that i can secure my life till the bank release and transfer the fund out from here then i will leave this country to join you.