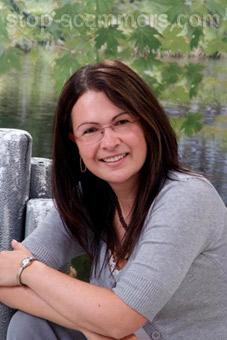 REPORT N1 (added on October, 28, 2010)
John (UK)
Says she deals in gold and dimonds ect and will sent certiffacteto show you she is seanding goods to your address and asks for help as she has not enougth money to get the ticket to fly to you then has problems paying bills and asks if you can help again on the way to the airport the cab will have a crash and then she will be off line for 4 days when she reapeairs she askes if you can help to pay for the medical help and as soon as she is fit to fly she says she will come. WHEN THAT TIME COMES SHE HAS TO PAY EXTRA TO CHANGE DETAILS and there are more bills to pay in the end she will send you the flight details and then ask you to send more money to pay last of bills and taxi fare to airport if you say no she will start to call you names and pick a fight so you break conntact with her.
REPORT N2 (added on June, 15, 2011)
Evert (Netherlands)
After meeting on Matchaffinity she quickly wanted to leave the dating site. After emailing we continued chatting through Messenger. All kinds of chitchat. Every thing you like she likes. She claimed to be from the USA, has a Dutch father and lived the last few years in Amsterdam (but speaks no Dutch at all!). Her marriage was over, her children live with their father. She claimed to be in Nigeria for work (dealing in gold). She speaks English very poorly. She doesn't answer all of your questions while chatting. After a while I noticed while chatting she was chatting with someone else as well. About 2 weeks later she started asking for money, to make an important deal. I told her I didn't have any money. After that I broke off all contact. I never heard from here again.
REPORT N3 (added on October, 8, 2012)
Kim (Denmark)
Kate Anderson is also operating under the alias Nathan Anderson, she's now 42, still same story, and operate on be2, says she's in Malaysia, but traced her mails to originate from Nigeria.

I so much appreciate it for getting back to me on the dating site and via my email address.I am Nathan Anderson and I was born on the 25th of August,1970,I was born and raise in Gaines-ville,Georgia,although I am a mixed race....father was an American and mother was an European and to be specific,she was from Amsterdam,Netherlands,lived there for about 3 years then,we ain't that much in my city,we are about quarter of a million and its a very peaceful community.My parents had 2 kids and I am the first born of the family,I lost my dad about 15years ago and my mum remarried to a Mexican who lived in the same city as we do,my immediate brother Mike,stays with our mum and step father till date and I think they are all happy.I have been married before and I am divorced now,I was married with 2 kids,Mary and Jane they are of age 9 and 12 respectively.My kids and living full time with my ex because he has the full possession of them and haven't seen them for a while.

A little description about myself, I am a simple, fun loving, outgoing person. I enjoy Family life and the home is important to me.I am a loyal, sincere person with a great sense of humor. A nice girl with a very good soul, caring and down to earth. I enjoy the beach, parks, hiking, sports, weekend getaways and romantic dinners. And can sometimes get uncomfortable talking about myself. I am honest,nice,gentle,kind,smart,socialable,friendly,also intelligent and trustworth
Read more