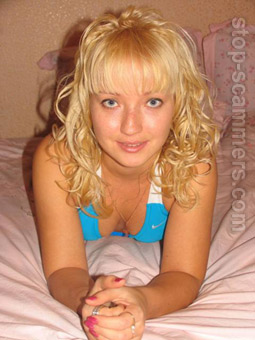 REPORT N1 (added on November, 23, 2010)
Howard (Canada)
This girl contacted me through Site2date and continued until May 2010. She is very smart and doesn't come out and I love you, just hints at it.
It took a lot of letters to bring out the scam in this one.
Her goal is to let you thing that she wants to visit you but needs the money sent to her via. Western Union, but I refused to use WU and suggested that she open a bank account so I could do a bank transfer so I could track it, she gave me all kinds of excuses as to why she couldn't open one
When I insisted I would only send money Via a bank transfer she stopped all communication. Prior to that if I missed a day sending her a letter she got all upset and wondered if I was still interested She sent me her internal Russian passport and I had it checked and confirmed it was a FAKE, I told her that I was going to have it checked and she was a bit concerned, but never told her it was a fake.
I haven't seen her on any other sites, but that doesn't mean she isn't out there trying to scam someone else.

Emails from Ekaterina Golubinskaya to Howard (Canada)
Hello my new friend!!! My name is Ekaterina!! What is your real name? To Me of 26 years. I live in the city of Cheboksary. It is small town. This city is located in Republic of Chuvashia. I work in medical sanatorium. At leisure from work I like to go to cinema, to prepare for dishes foreigns kitchens. In the winter I like to ski, I also go to an ice palace and I go for a drive there on skates. In the summer we with friends go on the nature. And during holiday I like to go in warm places of Russia, on the black sea. In Russia there are places where very much hot even in the autumn. When I come and the sea, I like to be engaged snorcling. Snorcling this diving under water with a mask and a tube. I always dreamed to plunge on big depth with an aqualung into the seas of other countries. I have finished faculty of physical culture. I the independent, cheerful, cheerful woman. But unfortunately not it is pleasant to all Russian men, therefore it is difficult to me to find second half. And then I have decided to get acquainted with the man from other country. I want to say that I'm looking for. I am looking for someone who will love and respect me. Who wants build strong family. I think that every woman deserves. This is quite a bit. Do not you? I'm not looking for friendship. Of course before embarking on serious steps need to learn a lot about each other. But I do not want a very long time have only correspondence. I think you agree with me in this.
Read more