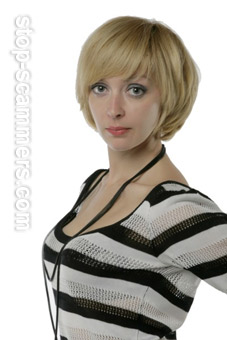 REPORT N1 (added on February, 9, 2011)
Jacek (Austria)
I have wrote her a reply to the letter that I became on FriendScout24. She wrote a nice letter that she is looking for a man in my age (I'm 58 and she 35). First, I couldn't believe, but then... I asked her if she could come for a couple days to visit me in Vienna. She said, that she would do it with pleasure, but she has not enough money for this trip and asked me if I can come, but you know in Siberia in winter it is very, very cold, so I wrote her, that money should not be a problem and asked her how much she needs. She said that ca. 1000 Euro will be OK., so I transfered it to her. After a couple of days she wrote, that the Austrian authorities are demanding 35 Euro per day and she wants to stay with me one month, so I sent her 1100 Euro. As two weeks have past she was already in Moscow to get her visa and then go to the airport. She wrote me that she got the visa and now she goes to the airport and she will write me a sms with which flight number she will arrive Vienna. I thought everything is going alright. But then she wrote me an email that the customs would not let her leave her country, because she has not paid back her credit, which has taken at her company for her apartment at the amount of 2750 Euro. I didn't want to believe her, but she could persude me to do so. Again I transfered her 2750 Euro. As she got her money after three days, she has wrote me that from the account she could get only 900 Euro, because her bank has blocked her account of security reasons and she needs 1800 Euro more. This time it was for me everything clear - that all was a big LIE. I told her, that this time I can't help her anymore. So she was unhappy and went back to Yakutsk if she really is from Yakutsk? Because her Bank head office is in Moscow.

I am very pleased that you responded to my post. Although for some reason I had thought that you will not answer. I immediately confess that I do not know German. And I do not live in Europe.
Honestly, I liked your page on the friendscout24. On this site I learned from my friend who was able to find their happiness, her beloved husband. I decided to try my fate, I hope to get. -)))
Now about myself a little bit, my name is Elena I'm 34 years. Was not married and no children I think that I still have everything ahead. I live in Russia, in the city of Yakutsk.
Yes it is very far from Europe, but it seems to me to date technology walking with long strides. And very soon, perhaps, the distance does not play a significant role.
I do understand if you do not respond to this letter. But if you decide to answer
Before you write me, I advise you to think
Are you ready for a serious relationship? I understand that the distance will be the first problem.
I think it would be without difficulties and not interesting.
On it I finish my first revelation. And just want to ask you not to play and not a joke.
I am absolutely serious, and not used to communicate with non-serious people.
I shall be very glad if you answer me and send your new photo.
I send you my picture, I hope you will enjoy.
Yours sincerely, Lena.

I'm sorry about that late reply to your message.
I
Read more