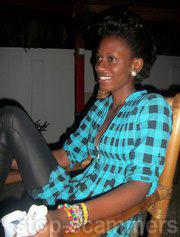 REPORT N1 (added on February, 23, 2011)
Dale (USA)
Works with a friend under the name of morgan smith , real name is adebowale olumide both have scammed me out of $1400.00usda dollars , claiming to wanting to come to me to the usa to get married? had reward money that was supposed to be being sent to me dhl to the usa, claimed to be married to me on travel document ,and asked to sign a false marriage certificate so she could board plane in south africa, friend made up false marrige certificate, dhl waybill ,went to trace number ? for shipment to me no such number existed ,gave me a 5 digit number dhl has a ten digit number for tracking package, got to airpot to board plane and got arrested for not having proper ownership of money on her and an amount of gold with no proof of ownership, friend got her out of jail and released to his custody to come to me , ? will not prove anything to you ,hides ip address in stealth settings,will not talk to you on her own phone uses friends number for anything, uses other peoples email adddresses to wtch chats on meesengers to gather information and then scams you thinking you are talking with another partie you originall have talked to using the same name as hers. .friend makes up false documents, flight comfirmations , visa, or whatever they need to scam you , they both will not prove or send any information to you requested, . she has western unions sent to a accra address then friends picksup money himself in kumasi ghana, i called western union to trace on receivers pickup and location and they confirmed all was picked up at a bank in kumasi ghana. address given in accra had no such address ever existed. both are scammers and need to be arrested for making up false documents,id theft, scamming,using govt and official names , i wrote to the state dept in ghana requesting info on the so called police id ,no such person ever existed within there dept in accra or kumasi both are true scammers and need to be brought to justice and posted here as scamming people.
Created: 2011-02-23    Last updated: 2011-02-23    Views: 1492