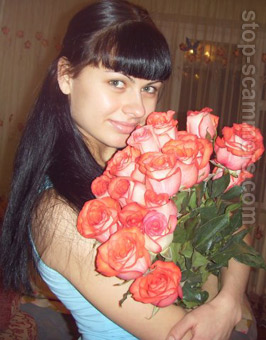 REPORT N1 (added on April, 27, 2011)
William (USA)
This lady frist contacted me on Are you Interested an add on dating for facebook. She asked me to email her @ worldboss01@gmail.com. I did this and she sent me an email back the next day. Then every day we sending email back and forth. She told me she didn't have internet at home and she was emailing me from work. I ask if she had a phone and she told me that it cost to much and she couldn't afford one. I should have stopped there and moved on but I didn't. We continued to talk each day and the more we email the more intense it got. Then she told me that her place of employment was closing down and she wouldn't be able to communicate with me. We had talk already for over a month every day and I had decided to offer getting her a computer and the internet for her home. She didn't ask. She got the information she needed and told me that she would need 500 dollars for the ineternet and computer. I sent that amount. Then about 4 days later she let me know that it was going to take another 300 to get a computer with a web cam. That seemed reasonable and then we could talk anytime we wanted and see each other. Well then on day she told me that her boss had given her the money to fly to me. I was suprised to say the least but if someone was going to do this for us then maybe it wasn't a bad thing. So withing the next to days she went to moscow to get ready for her trip. She emailed me a copy of the ticket and her flight schedule with flight numbers and time. Then the day before she was supposed to leave she told that the customs control would require her to have show that she has 3000 dollars for her to before she could leave. I thouhgt this was crazy and I told here I couldn't come up with the money. Well she came back and told me that she changed her length of stay to 30 days and she only needed to show she had 2000 dollars and her friend had given her some money and she only needed 1000 from me. The bad thing I did check this out with the embassy in Russia and they told me that this was not the case for boarding the plane and customs. I was so confused and I told her that. Then I did read on our Homeland Security with a non immigrant visa they may have to show that they have funds to be able live while they are here but maybe I read it wrong. but any way I went ahead and sent her the money. I had searched the internet for her name Yana Kisileva and the only thing that had ever showed up was where I had done the searches in the past. Well then I got the new flight schedule and she was to fly out on Monday. She called on Sunday and we talked a little about her trip and we both were so excited about it. Then Monday morning I get the email while on my way to work that when she tried to board the plane they stopped her because she didn't have international insurance and it would cost 650 dollars. I got upset and then the next day it was down to 300 dollars is what she would need from me. I had been talking to a freind of mine over the weekend and he was hoping she was true and when I told him about this he said have her send a copy of her passport or visa and she did this. Then I noticed that the name on the passport had one letter different. It had the name Yana Kiseliva. I seached the inernet and found where somone had reported her on another site and she was trying to scam this guy the same time she was me. I confronted her with all of this and I haven't heard anything back. I feel so ****** if I had only did a search for the name on the passport I could have found out alot sooner. I should have walked away when there was no phone so I have no one to blame but mysefl. I hope this helps someone to not get scammed by this user.

Emails from Yana Kisileva to William (USA)
Hi my heart and my soul Tim! I have dear friend - Tim, and I always think about him, I want to know all about him. Absolutly everything! (Smile).
I'm so glad to receive your letter today. I very much hoped that you will understand me and will write letter for the woman which thinks and dreams about you. Tell me about your ideas and dreams. And now I shall make it.
I to transfer for your son my congratulations happy birthday!
You it should be prepared well. For your son this day very important.
I wish it health and a lot of happiness!

I have news, may be it will be bad or good to you. I do not know... Yesterday in our firm came people from housing committee (State Supervision of the Available housing). They made extraordinary check of our building. They gave to us very bad results. Today my boss told me I shall have 3 months of a vacation. Because our building is in an extreme condition. A building where located our firm, will be closed on repair. Approximately in 1 week, and I shall have a vacation, but I was not pleased. I cannot refuse this vacation. In a building of our firm will be made major overhaul. Repair will last 3 months. I have begun to cry, because it means that I can't write to you, I can't use a computer. Tim, I was so frightened that I can lose you. I imagined that I should spend this vacation in my apartment, between four walls. I should sit in loneliness and think of you. I should aimlessly wander on streets and fall a
Read more