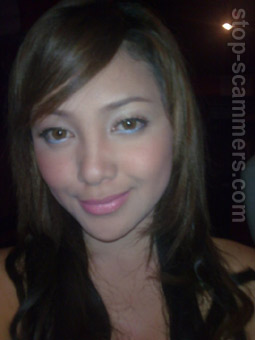 REPORT N1 (added on May, 18, 2011)
David (USA)
I was sent an email through the Filipinacupid website around the middle of February 2011 by a person named Cristina. We spent a few times within the site sending messages back and forth until by the end of the month, we exchanged personal emails. Due to the age the Cristina claimed to be, I was hesitant about responding initially. What changed my mind was the letters that were written and sent to me. They were written by what appeared to be someone who possessed a high intelligence and a fairly good grasp of the English language.
On the surface, this was to be admired and I mentioned that to Cristina in my emails. Cristina twice mentioned on the education received through the various levels, ranging from elementary and junior high, to high school, and on through college. In addition, the amount of reading Cristina stated added to the ability to write well. In addition, Cristina stated this regarding her writing abilities, Well, my dexterity in writing has been polished in the passage of time. It has been honed since I became a student journalist way back in my formative years of my primary, secondary and my unfinished tertiary education. Besides I am a voracious reader who always likes to spend my spare time reading books.
My first email from Cristina came at the end of February which started of normal, stuff about Cristina, questions referred to me. Nothing to raise an alarm at this stage. Cristina also sent 20 photographs depicting her alone, and her with her friends. Some of them at a park in Davao, Mindanao.
In Cristinas emails to me she states how she wants not to jump to early, that she doesnt like to make quick decisions regarding matters of the heart. Yet by the next few emails, shes insinuating her feelings for me and by the fourth email, shes fallen in love with me.
There are also mention of using her friends cell phone so we can make talk together. This is brought up in a latter email again to me. One that Cristina makes a fatal error and one that demonstrates her scamming heart.
There is one central theme that runs through her all her emails once she started to express her love for me. She started to use my last name as her last name, as how it would occur once we were to be married. Also, I started to observe some distinctive variables about the emails that were sent. When my name was used, the words were in a different font and color as if the letter was already prepared for mass emailing and the only thing that needed to be added were the names of the subjects being scammed.
Within a month of writing, Cristina sent a second email, this time with 30 photographs attached. At about the one month mark or our emailing each other, the first mention of my helping procure her passport was brought up. I played it off and never responded to the request. I found it quite odd that I was in a country working, and which she would not be able to visit, yet she wanted to have me pay for a passport so she could come to me. Never did she ever state where I was at. Again a generic statement that ran through her emails. Rarely did she respond directly to my questions and instead, sending me an email that had general and vague wording.
In one email, Cristina talks about four Chinese businessmen kidnapped in the Mindanao area and that it would be too dangerous for me to come visit her that she could come to my place. After checking the newspapers in the major Mindanao cities, I could not locate any article regarding the kidnapping. I kept that quiet to be added to possible suspicions.
Out of the blue, without any of us speaking of this, she sent me a very ****** tale of how she would like to see our first date to be. And again, she sent me another batch of photographs. In some of the pictures, there appears to be a tattoo on her left chest area. I asked her Cristina about the tattoo, if it was a real one or a transfer. No answer to my question until much later when I had her answer a questionnaire I had sent her. In that, she states she didnt have a tattoo.
She also sent me an email stating she is in Cebu and can travel to Manila easily
About a month and half into our exchanging of emails, Cristina sent me two emails back to back. The only difference in the emails was the name she used to close out each one. In the first email, she had used the name Joebelle B. delas Marias, and in the second one, she used the name I knew her by, Crisitna Sadia. Being curious of the name I had not known before, until she also used the name in the emails as her friend who has a cell phone and which we could use to talk with. I immediately searched the internet looking up Joebelle and was inundated with a number of responses. All referring to a scammer. And which was listed in this website.
The next email had the second request for a passport, along with other expenses that she would need to incur just to come visit me in my place. Again, never using my actual location, or the US, or state I was from. I responded to her that I make it a practice never to give or loan my money to anyone, friends, and family alike. That email came at the end of April, and although she had sent me three more emails professing her love for me, once I sent the email stating I would not pay, I have not heard from her in about a week and half.
Created: 2011-05-18    Last updated: 2021-04-05    Views: 1431