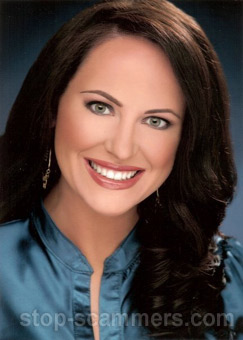 REPORT N1 (added on August, 16, 2011)
Greg (USA)
I recieved this e-mail from a U.S. Army captain expressing love for me. She also wants me to help her smuggle 8.5 million dollars out of Afghanistan through a security company. She wants me to go whereever in the world to obtain this money from a security company. She has promised 35% of the 8.5 million dollars. I totally don''t believe this is a real Army officer asking me to do this. Yes the photos are of a woman in U.S. Army uniform posing with her troops. She also claims to have graduated from the University of Texas.
I feel people need to know about this scammer real fast. She does send a article that verifies money being found in Afghanistan and a group of army personnel being questioned. I just have a hard time believing this is for real and not a scam.
REPORT N2 (added on July, 15, 2016)
John (Brazil)
This report deals with Brenda Morgan known in your Data Bank as Elizabeth Morgan. He/she first contacted me on the 5th of July 2016 via Badoo dating. He /she said that she was an American serving with the US forces in Kabul, Afganistan. I received from him/her photos in uniform and various others in civilian dress. He/she gave me her email address which is brendamorgan955@gmail.com and we began to converse via Hangups. Over the weeks I asked her/him to send me more photos but I was told that he /she couldn't because he/she didn't have a cellphone. The chatting went on and she told me that she was in love with me and wanted to come and be with me in Brazil which is where I live. On a couple of occasions we asked each other what the local time was and she gave me a time difference of seven and a half hours, the actual time difference between Brazil and Afganistan is six and a half hours. During the chat sessions many times I asked her to send more photos and eventually He/she told me that cellphones were not available there and that she/he wasn't in a financial state to purchase one. She asked me to send her one by post, a Samsung Duos, via a friend of hers there. I asked many times for the address of her base so that I could send it direct but he/she would not give me this address.

Emails from Elizabeth Morgan to Greg (USA)
Hello my name is Elizabeth Morgan ,I was(born May 13, 1976)single woman, I’m an Army captain in united state of America presently am in Afghanistan at the camp, a member of the U.S. army, which was deployed to Iraq at the beginning of the war in Iraq,

I come from a proud/humble family of patriots. I earned my commission through Army ROTC at The University of Texas at Arlington in 1998 and was commissioned as an Adjutant General Corps officer. Since then, I've served in such exotic locations as Fort Polk, Louisiana; Fort Hood, Texas; and all over Iraq.

But I will like to know you better, tell more about you, I have something very important to discuss with you in my next mail. Tell me more about you in your next mail and send me your pics for more discussion, thanks I will be waiting to hear from you.

Thanks I got your mail in a wonderful day and happy day which I will like you to be serious with me, It gives me the greatest joy to read from you. Sometimes, life certainly can feel that way and what better shelter from the storms and trials of daily life than friendship and to know that there is someone out there you can fall back on. Sometimes people come into your life and you know right away that they were meant to be there...to serve some sort of purpose teach you a lesson or help figure out who you are or who you want to become.

Dear am a member of the U.S. army Me
Read more