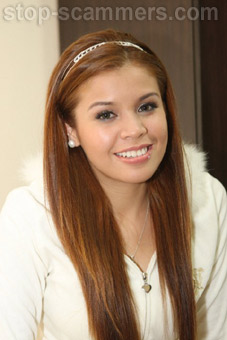 REPORT N1 (added on August, 31, 2011)
Rob (Netherlands)
This is a very tricky one. Beware! I have corresponded and exchanged photo's daily with her for a whole week before the first sign that something was wrong appeared. I received a copy of her passport so that I could see that she was who she claimed to be and that she was as old as she claimed to be, though I never asked her to do this. Then she said she needed some money for the internet connection. It wasn't much, so I was ****** enough to send it. After 3 days she made her next move and the story became really bizarre. She said that she wanted to enter a Beauty pageant to try to win money for her sister who was very ill, but she needed money for a night gown, and if I didn't send it she would **** her computer. She was becoming desperate because she felt I wasn't buying her story, So she claimed that she really loved me even though we never met. In one of her letters her English dramatically improved and there were emoticons in it which she had never used in the past. Obviously someone took over to keep me on board. Very ******. In the end it was not the little bit of money that I sent that bothers me, but the waste of time and hope. I reported this to the dating site FilipinoCupid, and they removed her profile. She may turn up somewhere else though. What is so curious about this one is the copy of the passport. It doesn't look faked, so I think it likely that she will use the same name again.
REPORT N2 (added on January, 22, 2015)
John (Australia)
Same as other report said she was in Thailand and was in fashion store not much work asked for money for internet, so sent $25 then wanted webcam sent another $30, sent tht then needed extra money to run wired for connection . Then a friend text me to say a car had run over her foot and she needed money for hospital bills I sent another modest amount then frien d was pawning her tv etc to pay rest then she now had no nmoney for food was trying toi sell some of her new clothes in street, now extra hungry could I please send more I sent money for her birthday and not hear from her for a week no thank you.
Tjhen azpologised to me for lieing zs she pawned webcam to get money to move to general santos with parents so wanted more money for webcam and internet bundle again so sent a little then modum wasn't working and at internet cafE asked me desperately for money ^695 pdesos as her parents water cut off etc etc ZI sent one little amount more and not heard from her she answers phone tho.

Romance scam letter(s) from Ginamae Ventura Mahinay to Rob (Netherlands)
hello,
how are you now?i am so happy that you send me a message here.i am really like what your message to me here.

yes i will be going to tell you about my self here.,

i am 29 years old. i am single and never been married. i am working as a sales lady from the department store.

i am separated with my parents here for 2 years from now. i am here in zamboanga city. because i am working here so that i can help them also for they daily needs.

i hope that you going to tell me about your self also here...

take care always and have a nice day.


hello.
how are you now? yes your right zamboanga city is a nice place also here. well yes santa cruz island is a nice beach here. yes my parents live there now. i miss them so much for now that we talk about them. i have 1 brother and 2 sister they live now in my parents in davao city.

yes i will be going to send you some photos of me here and i hope do you like it.i am working here at southway

hello rob.
how are you now?its so nice the pictures you send to me here. well i never been try to going take a pictures on the water,. how i wish some day i can be...
well y
Read more