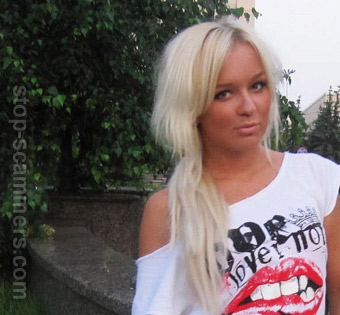 Emails from Natalia Mayorova to Lance (USA)
Hello my love Lance!!! I am very glad see your letter my love!!! I so would like your love and tenderness, your high temperature and tenderness. Sometimes I so would like that you have entered, have sat down me, Has softly captured me for a neck strong hands, I have captured you and have kissed you directly on a mouth so softly, hotly and violently. I would finish you in gentle, female embraces and I will tell to you about it, As I am strong you, I love and that to ANY, NEVER you I will give, as you only mine.
My love I have gone to travel agency. I have left agency a bit discouraged. Now I will write to you more and more in detail about it. In travel agency to me have informed it for a trip in It will be necessary for me to make for you following documents:
1) I should make the passport for, go abroad, what expenses of 5 700 roubles and will be let out within the limits of 3-5 days.
2) Also it will be necessary to let out for me a tourist visa and medical inspection. Cost of the tourist unitary visa during the period of 90 days does 2 700 roubles, and medical inspection of 4 000 roubles. This visa gives to me, is correct at residing at you within 3 months from the moment of stay to you. There are visas to longer term, but they are more expensive. The visa will be ready within the limits of 4-6 days.
3) As, it is necessary to take out an insurance policy for me. It is necessary if for me there will be an accident, Or I will be sick in territo
Read more

Emails from Natalia Mayorova to Peter (Australia)
Honey am just thinking about you so i said i should write you some poem...

How can we trust love, and be sure it will last?
We gave our hearts to others, many times in the past.
We shed many tears, and built many fears.
And now we're afraid to let our hearts go.
Because of the pain we've come to know.

But if we are to love again, we have to take the chance.
And trust our hearts, our only guide, to find that true Romance.
So if we hide the Rose from the light, we'll never see it grow.
But if we plant it in the sun, we know the Rose will glow.

So tear down the Iron Gate you built so high and open up the door.
The love you find may be the kind, that you've been searching for.
We know that deep within there is a special part.
And we know for love to live, there has to be a spark.
And when that spark, grows to a flame.
The heart we gave is never the same.

The days begin and end with songs.
And to that newfound love your heart belongs.
You walk on clouds of fluffy white.
Knowing and trusting that your heart is right.

The Rose will glow and love will grow.
And make a spectacular sight.
For all that see the Rose, will see the petals bright.

Honey i want you to send the money via western union to this name... Honey i can pick the money once here cause its not far from London. is just train there.