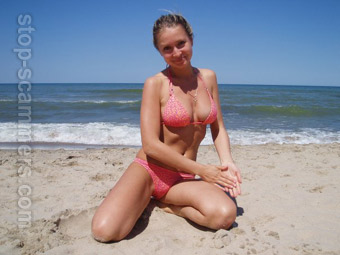 Emails from Tatyana Korchyagina to Karl (England)
I'm from Russia!!!
I'm search for serious relations!
If you are interested in my letter,
I with pleasure shall continue our dialogue!

I am grateful to you for the answer!
It was very pleasant to me to see your letter in the mail box
For me the age has no value, in fact the main thing that you was young a body and soul
I search to myself of the partner in life is more senior than myself because men as children, at me were attitudes with my contempoparies and they have not liked me I search clever for the man to which it would be interesting to talk. The the man is more senior, the it more cleverly and is more skilled in all senses.
Thanks for a congratulation, but at us in the country celebrate a holiday from December, 31st till January, 1st.
I very much would like to visit the Great Britain, and it is possible, I have a passport for travel abroad and if we shall like each other all is possible...
You are not frightened with distance between us?'?
Personally I am done not frightened with this fact as I consider that the present love does not know borders!
I wish to warn at once you, that I do not search for long correspondence as dialogue on the Internet does not give full representation about me person.
I would like to meet you if we shall like each other.
I write to you in hope that you that person to which I can like and with which I can construct Serious attitudes.
I was very much pleased when toda
Read more