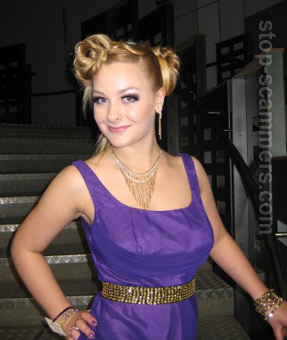 REPORT N1 (added on November, 21, 2011)
Larry (USA)
Scammer from Russia. I am sending you this one to warn others about her.
REPORT N2 (added on December, 28, 2011)
Peter (Australia)
Name Ludmila
DOB 20 Nov 1980 31yrs as of 2011
168cm Tall & 50pound
Said he Employer is sending her to Sibera to open a new travel agency there & will not be able to write.
Said she has a mortage on a flat her parents are mom's is Natalja, and dad's name is Victor mechanic in Kolkhoz.
She reads your letter's & she answer's all you Question. So either she is new at this scam or she is real.
She has told me about a man in the USA. Who she visited.
I think he has put the first report on here. She told me she paid to visit him & he was going to give her back the money, as she said he would not so she went back to Russia.
She said she was married but her husband die in a car accident.
I am not a 100% shore she is a scammer as I have not been able to fine another records on her or her photo's. I have 55 of them. An only 16 letters.
But if she is in contact with anyone in the next few months then YES she is a scammer as she is surpose to be in Sibera.

How are you? Today is a very good morning because I see your letter again and read it with great joy. I am so pleased and happy to see your letter. I really like to talk with you and it's very interesting to for me because you're a very good person my Larry. I think This day will go quick because my mood at the height of very strongly. I want to tell you about Russian men and why do I can not be obtained relations in Russia. Many men are very good until you know them only from the good side. But then they are very change in the bad side and you can tell them what you know with a bad side. Some want to drag women into bed and only if the this man will be the relationship it will change with other women. Russian men have big problems with alcohol and drug abuse. A man who drank or used drugs in this state may hurt his woman and it is very terrible. Me do not like men who drink a lot of alcohol because I it seems to lost people. I think that the relationship between man and woman should be built on trust and respect of 50/50. In this the couple will have the understanding and will never occur conflicts. I drink very rarely only in the company of friends and just semi-sweet red wine. I do not smoke because it is very harmful and deadly habit. So I do not consider the Russian man to build a family. I think you agree with me because there is a problem in cities around the world. But I just I hope that I will find love and
Read more

Emails from Ludmila to Peter (Australia)
Greetings, my stranger!

Just give a few minutes and read my letter...I'm very excited and I do not know exactly how to start. Well, my name is Ludmila, and I live in the north of Rus. I am 30 years old, have higher education and work as a tour agent. I write you now, because I’m alone, and I guess you are as well! I am a serious woman, and I want to find a man who is serious about relations as well. I want to find my true love and build a strong and happy family with my man. I have already had relationships with the man from the USA, I’ve met him through the Internet . That was the wrong choice, that guy was a great deceiver, so we didn’t make a family and whatever at all. That’s why I try to find a real honest man here again. My friend who now lives in America met her love on the Internet, she’s happy now and so she said that it bad things happens, but one shouldn’t try again! That’s why I am here!
She says that her husband is very romantic and caring, this is a hope for my success as well! Last time I tried to find a man myself, this time I decided to use the International Wedding Agency, which connects lonely hearts around the world. I paid this agency some money for you and so the wedding agent sent you my letter. I really believe there’s much to learn about each other, so let’s not lose time! I guess you are quite an experienced man and have lots of stories to tell me! I don’t want to tell you everything about myself at once, just want t
Read more