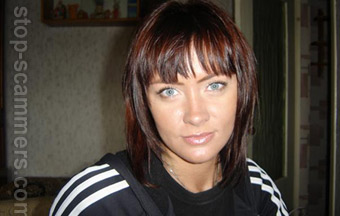 REPORT N1 (added on November, 22, 2011)
Dale (Canada)
She contacted me on the dating site and asked me for my email adress directly so i gave it to her and we had communicated for pretty well 3 months.She told me that both of her parents have been missing with out a trace for 7 years and she is an only child. she asked me if i could come to russia to see her and i said it will be several months before i can take a leave of absense from work. then about a week later she told me that she will get her documents in place and come to me and that she would find a way to financially do this preaaration herself. This all sounds ok right ? She then sends me an email with all her flight info including airline companies times of departures and arrivals. about 10 days before her arrival to canada she told me that she had relied on one of her frinds to help her financially and now her friend was unable to help. she was short 431 cdn dollars. she asked if i could go to a western union to help her complete the financiial shortage. good thing i was to busy with work to do this immediatley i never got a chance to go to western union.I still strongly believed in her at this point until i checked my emails.She had sent me another love letter telling me again that she cant wait for us to meet each other she cant live with out me any longer and she wants to make all of our dreams in to a reality. the problem with this letter is that she had adreesed to some scott guy. well she should of remembered that my name is not scott after 3 months. i emailed that letter back to her and asked for an explanation and also sent her an email a couple of days after the previous one asking her why she is up th these types of situations and telling her to get a job and work for her money. She would email pretty much everyday until this point and it has been almost 2 weeks since i have heard from her. beware.
REPORT N2 (added on December, 17, 2014)
Dan (USA)
She will actually call you saying she ran out of money and needs to show customs agents $ 2500 to leave the country. She says she has no family. She will say she's homeless and living on the streets in Moscow and needs your help. She's very convincing and almost fooled me with the phone calls.

Emails from Irina Bobrowa to Dale (Canada)
You gave me your email on plentyoffish today. I decded to write you. I even deleted my profile there. I hope that I dont make a mistake. And you really want to communicate with me.
I send you my photo. You like it? Want me to send my other pictures?
What is you real name? My real name Irina. All to name me so. Can you tell me more about yourself? I would be happy, if you send me yuor pic.
I need to go now.I will write you more when I have time.
Bye!
Irina

I wrote to you yesterday. And I think the answer or not. And I'm glad you told me. I would be upset if it had not received your letter.
Dale I would be vry pleased if you send me a photo. I hope that you will send them to me soon.
I want to communicate with you. Because you liked me. And I think that we are familiar with you is not by accident. What do you think about it?
Dale I do not know where to start and what to tell you. Not tell a lot about myself. I live in a small town. Name city Plotinka. I am 28 years old. I live alone, in a hostel. The place is not much. But I was mising. I graduated from college. I am a teacher in the school. I work in a school near my house.
I never will get acquanted on the Internet. Learned that there is such a possibility. And I decided to try it. Why? Probably because I have not met a man in my city. I have tried to meet with the men. But this is not what I want. Dale I do not want just ***. And I do not need a man, to d
Read more