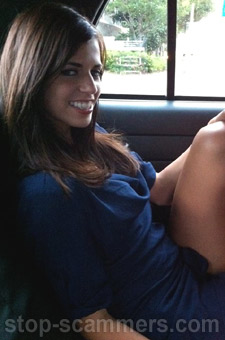 REPORT N1 (added on December, 28, 2011)
Brian (USA)
Meet her on Cherry Blossoms dating site where she contacted me by sending me what is know as a smile. We did a few messages over the CB site then moved to sending e-mails and pictures using our Yahoo e-mails and then doing Yahoo Messenger daily to chat. Within second e-mail she shared how she had been in the hospital because of stress and had no medical insurance and now doesn't have the money to buy her food. I said I don;t send money, but she said she would keep writing me even if I didn't send the money,she understood, which made me let my guard down, I sent her about $200, which she thank me for many, many times. a couple of weeks later she told me the story of her roommate that would be moving out soon that had meet a man on CB and was moving to Scotland to be with him and she had not paid the internet, and it was being shut off on Tuesday. Again she needed money and I thought I would send a little extra so we could video cam. This time everything she needed was about $300. I said this is the last time that money would ruin the relationship. She understood. We talked daily for weeks with her getting up at 6:00 am her time to be on with me at 10:00 pm my time. Very great conversational ist and fun to chat with. Her story was she had been taken from a orphanage in Connecticut when she was 11 by a mixed race couple, her dad was from Tanzania and her mom from Italy. In January 2010 her dad died while working for a Tanzania oil company. Her mom upon hearing this had a heart attack and died. Seemed like a pretty tragic event and I did have some doubts about her moms spontaneous death, but Tina - (Russell) did a good job of selling it. She had no problem with our age difference, she 33 and me 56 or that I could not have any more children. She laughed at all of my jokes and found me very intelligent and handsome, etc..called me a match for her. She took her time grooming me for ****** things and of course she sent lots of great pictures, about 18. They seemed natural pictures, not taken by a professional, and she had a fairly reasonable story to go with each one. About a week ago on a Saturday we chatted for about 3 hours, towards the end she tells me how she has fallen in love with me and tells me so several times including some amazing graphics with falling hearts on Yahoo Messenger. It felt nice, but I let her know I don;t say those things until I know I will always feel that way. She said now I have a man I know I can trust I want you to share in all I have, my father left me an inheritance, but I have to be either engaged or married to claim it, can you help me, you just have to send a note to the Barrister that is interfacing with the holding company of the inheritance. They will tell me what to do and after I get the money I can afford to move to America and be with you. She said she wanted to adopt a daughter since she was adopted and because I could not have any more, I said we could talk about that in the future. I got the e-mail from the barrister and it did not look write, words not spelled right, lower case i rather than I. Did not mention her fathers name and we were talking about his inheritance. I wrote back that I wanted his address, phone number, her father name etc. After receiving them I sent my name address and telephone number, the e-mail back talked about 7.5 million pounds, and that we needed our marriage certificate, not what she had said, and that there was some fee of 1,200 pounds to have the money released to me, again she never mentioned anything about money. I told her I would do nothing further and I had no money to give under any circumstance. This Barrister said he had know her father for 15 years, I told her ask the Barrister to put the money up and you can pay him back double. We went back and forth on this until she knew I was not going to do anything. We started again to chat as before, but then I keep finding things that did not seem right. One thing she said to me I know I had read from her before, but it was a strange way to express yourself and it seemed it was the exact works I had seen before.

Hello My Love,
Sorry i missed you this morning... I over slept and just woke up about an hour ago.. already had my coffee and now i am about ready to leave for work... so just wanna drop you a quick note for you... Thank you for keeping to your words by sending the barrister an email just as you promised and i hope he gets back to you on time today as he is a very busy man but i am sure he will get back to you once he reads your email... And also i got the video and the youtube link you sent me... thanks a lot for those too, It made me had the chance to watch some other great videos too... I hope you are smiling now while reading this email because i am and i want to use the chance to say I LOVE YOU BRIAN.. well i have to run for work now, hope to hear back from you soon... bye for now and stay safe.. Good Morning!

Good Morning!
I am happy to hear from you concerning the inheritance of my late client's daughter Ms. Tina Russell which she wants to entrust to you as the man of the family.

I have been their family attorney for fifteen (15yrs) now and the father may his gentle soul rest in peace as he was truly a man to be remembered . I do travel most times when it comes to helping out my clients in their various situations. Once more i am pleased to meet you my Mr. Ogde
Read more