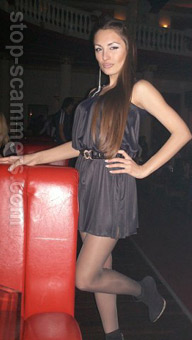 REPORT N1 (added on January, 11, 2012)
Marco (Bolivia)
Masha, or Maria Nasteca writes beautiful emails on a daily basis. Now it is wintertime so for visiting the Ukraine it is not so nice with the cold so we decided to go to Turkey but she did not have a passport. I sent $200 by western union and she retrived the money in the city of Stachanov, Ucraine.
Emails continues, and she mentions that this was her best present because she had her birthday on December 12, 1981. Then I would appreciate to call her on sundays on not just on weekdays but she needed then an additional $50 which i have also sent thru western union. Once again she collected the money.
Then she wrote just before the old year that I was "her man" and not to have any doubts about that and I have never heard from her since.

Emails from Maria Nasteca to Marco (Bolivia)
Hello Marco, the guy in the middle :)

Thank you too for your reply, and sweet compliment and your pictures as well I liked this guy in the middle.

Tell smth about myself... I just don't know what to start with. As you know my name is Masha. I was born and live in Ukraine, the eastern part, the name of my town is Stahanov, but it's rather small one. But why did you moved to Americaas you are Dutch?

I don't have great experience because I am here just for some weeks, sure some gyus wrote to me, but as they were not serious and wanted to have just some fun, and I don't have that much free time to waste it with them playing and discussing some foolish topics. So that's it.
And what about you?

Marco, hope to hear from you soon

PS: I am sending you as well two pictures

Thank you for the explanation, I just didn't think that the life in Holland is not that good, because you know from mass media it's difficult to understand what's going on in other countries and make a real picture of it. But anyway I like that feature of you character that you reach what ever you want, for a man it's very important, but I don't like to charactarize myself, I think you will make your opinion about me anyway and see what kind of person I am. You know as in each country we have different people good and bad, it's like a stereotype that women here are good in housework are soft and kind
Read more