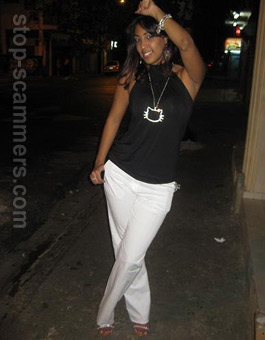 Emails from Hawa Bansi to Neal (USA)
This is me and if you are wiling to continue is okay ...But i will assure you that there will be no **** pictures okay ...

I come here today in this way because I need to apologize to you. I failed you. Although I did lie to you in words, I lied to you with faces that did not belong to me. I never meant to ruin the friendship that meant the world to me. You mean the world to me and now I come to you asking for forgiveness. If in your heart you find you cant, then I will understand and learn from this experience.You have come into my life at a time when I needed you the most. We talked about so many things that I started to realize my heart and my soul could actually feel something other than hurt. You placed comfort where there was fear, confidence where there was doubt, a shoulder where tears could fall and completeness where there was emptiness. I wanted to hold onto to this so badly that I did whatever it took for you to notice. What I didnt realize was that I could lose my entire being, all of who I was and all that I had placed in you. I wanted to be the one who would be there when you needed to talk. I wanted to be the comfort for your soul when the world was too much to handle. I wanted to be strong for you when everything else seemed impossible. I wanted to love you in only the way you deserved to be loved, never realizing that I was destroying myself and you. Somehow I needed you to be a part of my life.
Read more

Emails from Hawa Bansi to Joseph (USA)
My sweet love sorry i have not been mail you from since morning ... there was a little problem last night mum was very sick so i took her to hospital this morning and i have to raining to the bank to get the money also i just got home and I have got the money also thank you so much .. your help you do for me baby ... But the problem is that i when i pay my friend money baby i use the rest at the hospital as am talking to you now she is there ..now talking to you my dear .. But i have to come home and cook something and take to her at the hospital so this is what has happen forgive me that i have not send you any email from since morning it is not my fort it is Mummy fort okay so am sorry ...Do you know i have miss you so much and am thinking about you also ... baby Am little sad but i have also miss you so much and am still thinking about you and mummy also ... please try and reply to me cos i have miss you so much and am trying all the best to meet you at 4pm my time also .. okay so kisss to you and i love you more ...Kisss to your hard **** and lovely ***** also hahhaha

What can I say about me? My real name is Getrude you can call me Getty for short, I'm sorry I had to hide my real name for safety reason, Now I feel so safe and comfortable with you that's why I'm telling you my real name, forgive me Dear I'm sorry. I'm 32 year old and I will be 33 year old next 2 days as you already know, I'm 5"7" tall, I'm 121 lbs, Very healthy and strong woman. I was born and raised up in Sweden - Stockholm.. My Mom is a Ghanaian and My Dad was a Swedish, He died 9 years ago and My Mom relocated to stay in Ghana with me ... I'm a University Business Graduate with a First Class Certificate in Business Management and Accounting.. I work in a Local Gold Mining Company as Secretary to the Manager for couple years now. Honestly its a good Job but they offer very poor salary bcose its a new Company.

My hobbies are not too many but to mentioned, sports (Basket ball, Golf, Snooker, and others),watching movies, going for walks, listening to music (almost all types of music), I like going to the beach, walking and holding hands with my partner, Having ice creams and having some more fun together. Oh I like dancing to a good music with my partner or having him watching me or close to me. My favorite movies are romantic movies, adventures and action. Eating habits just about anything. I don't smoke at all but I drink alcohol occasionally. I'm always smiling and don’t easily get irritated, It takes Heaven to fall before
Read more