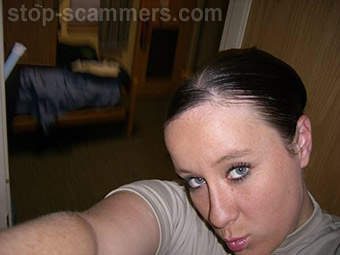 REPORT N1 (added on March, 7, 2012)
Glenn (Australia)
This person was on a dating site stating that she was from a country area of Australia (which gets you interested), she also claims that she is an American and her dad lives in the Wakiki (Rockingham WA area). When I contacted her she claimed that she was in the British Army stationed in Afghanistan she gives a long story of being a widow as her husband was killed in a helicopter crash there and wants to find love. She claims that she hasn't had leave since she has been there. She also will send you some photos of a lady claiming to be her but on closer inspection there are different people and also some of them are quite clearly in American Uniforms not British. After a day or so she claims that she is in love with you and wants to meet you but you have to make contact with her Commanding Officer and apply for compassionate leave for her. After a day he will state that you need to pay 475 pounds to allow her to have leave. She continues with the love notes and how she wants to meet you and be with you. To date I've played along but haven't sent any money as of yet.
REPORT N2 (added on March, 26, 2015)
Jeff (USA)
I did some checking out this lady is saying she is looking for love i searched the picturs she has bin sending me they belong to another lady she wants money to come home from iroq she saying she is in the army i found out by using google photo search i,m trying to get in touch with the lady the pictures belong to she is out of the service rite now but the lady i,m talking with is saying she is still there don,t send money this person got me for some.

Emails from Petra Kent to Glenn (Australia)
Hi Gleen,
Good morning from here, I woke up lately and have to rush and prepare for Parade but I will be back home shortly and hope to see your email and chat with you when am back.
I thought of you so much last night also and I think we are both on the same chemistry, I am comfortable with that? really yes, Thinking about someone I just met. its really crazy but okay...I love what am feeling about you...
Petra

Hi Gleen,
Its nice to read from you again, am just back from parade for lunch and it amazes me that everytime I open my email now I see an email from you.
I think we need time to talk to each other and get to know much more about each other,We have to be so sure and certain of ourselves about making sure that this relationship is what we want out in life,( or if i may ask, what do you want from me), maybe you dont even want a relationship....but if you want a relationship with me, then we have to be sure and certain of ourselves that this relationship is our future and everything.. Everything in life happen for a reason, my being lonely for a very long time makes me want a companion and a man to share my feelings with, I'm in search of a soul mate to spend the rest of our life's together.I hope you know Love is not about finding the right person, but creating a right relationship. It's not about how much love you have in the beginning but how much love you build till the end

No one is perfect and w
Read more