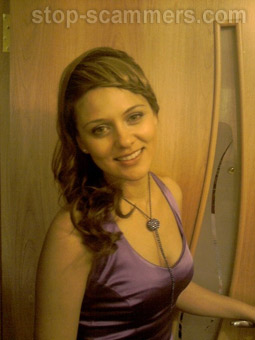 REPORT N1 (added on March, 8, 2012)
Brian (Denmark)
She makes first approach on dating site and aske for your private mail.
In her profile she claims to live in your country.
The dateingsitee I meet her was Match.
I corrensponded with her almost on daily basis fr 6 weeks.
I did suspect i was a scam but contiued the conversation to see where it would end.
Female claim 34 years old. Want a familly and a nice life, She claims to work for a russian TV shannel within advertising.
Quickly she found you as her perfect match and want nothing else then meet,
She cant afford ticket so she ask for the money.
She sends a lot of nice pictures, when she doesn't get money she start to complain how misserable her life is without you and that she doesn't know what to do.
Then she makes herself anonymus.
She claim to not have phone, she is not aloud to specify where exactly she works and so on.
REPORT N2 (added on May, 18, 2012)
Mario (Switzerland)
The girl contacted me on Meetic and asked immediately for private emails. She wrote in German and claimed to live in Switzerland in her profile. I discovered a few days later that she was Russian and lived in Chita. She said that she wanted start with friendship's correspondence first, but very soon she started to write love letters. She sent a lot of pictures.
I suggested to visit her in Chita, but she tried to avoid to answer to this. So, I said to her that I suspected that she was a scammer.

Romance scam letter(s) from Anna Kolombina to Brian (Denmark)
I am glad to see your mail and nice photos today! I hope you have a nice day today?
I see that you are really a very good person and our relationship should be developed further.
With every new day I learn more about you, your life and your dreams. And this seems to me wonderful.

I told you earlier that I was married.
Our marriage proceeded within 3 years and then we have divorced.
It's a very sad story, but today I want to tell it to you.
At first I was very happy when we got married with Vladimir.
My former husband's name was Vladimir.
I thought I'll be always happy and we could live together long and joyful life.
We made plans together and we wanted to have children in the future.

But once I began to notice that Vladimir came late from his work and sometimes he even didn't appear at home for night. When I asked him he explained that he had to stay longer at work or spent time with his friends.

I didn't like it and because of that we argued fiercely every day. I understood that it couldn't be continued for a long time and soon our marriage will be destroyed.
I asked him to think about it, but he was not interested in me anymore.
My friends told me that Vladimir cheated me with other women. At first I couldn't believe that, but then I understood that he had other women. I realized that he didn’t love me and he was interested only in ***.

I suffered much about it, but I couldn't do anything. Once I have told him that I gave
Read more

Hi Mario!
Today is a good day because I read your reply:)
Thank you for your nice photos.
We do not know each other absolutely, we only have a couple of messages on the Internet.
But I hope that our relationship can make us good friends.
I was born in Poland, but now our family has lived in Chita.
This is a country town in the far east of Russia.
Time difference and distance are not important in our time,
when there are computers and the Internet. We can
Read more