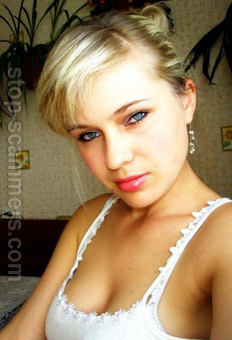 REPORT N1 (added on March, 30, 2011)
Archie (USA)
She has written over 140 sincere personal letters during Nov 1st to March 23rd. Received total of 5,500 USD: $2,100 for her visa application and travel expenses (via Moneygram), $3350 for the cash to show the Russian authority to travel to the USA (via Western Union).
REPORT N2 (added on April, 10, 2012)
Troy (USA)
She initiated contact with me on match. Me and her met on feb,25th and our letters were sent every day back and forth until march 8th. I did notice that her outside pictures didnt match the time of season in her country but thought that they may have been taken earlier. She wanted to be with me and said she was on her way but didnt relize how expensive it was and couldnt come. I said i may be able to help you. She then said she would find out what she needed to arrive to me and the cost. She said 710 dollars for documents and 1230 for plane tickets. I sent her the 710 and i am out that. I did send her 1100 hundred more but forgot to give the control number to her thankfully. because of your web site and a clue in her last e-mail i found out she was a scammer and got my 1100 dollars back from western union. western union is what she used to get the money from me.
REPORT N3 (added on April, 24, 2012)
Glen (USA)
Daily exchanged emails. Nice pictures, not ****. Includes her mother and 1 friend. Her story father death in war when she was 3 years. She work as piano teacher in music school.