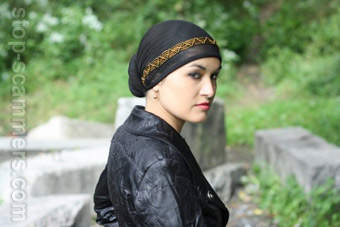 REPORT N1 (added on April, 17, 2012)
Ramy (Egypt)
This girl speak about marriage, and want you to transfer money for his travel, after it, she lie and say that the airport is not allow to travel, she must have more money for insurance to travel, and she can not back to his home and want more money, she say on the airport.

Emails from Anna Azamatova to Ramy (Egypt)
My love Ramy! Salam Aleukum!
I only now come and I went to the airport I have just returned from the airport and I have bad news, I in confusion now, I do not know that to me to do now!! I have tears in my eyes. I really dont know that to do now. now I'm cruing.
My dear Ramy when I have gone to the airport that I at once has approached in registry, and has shown them all my documents necessary for flight, my passport, and the ticket aboard the plane, the manager at once has seen these documents and has told that all well and that all documents well, and that I without any problem can use these documents for trip in Egypt.
But when I already began to leave that he have told me that he hopes that I have not overlooked cash money. and this money are nesessary for that trip.
I do not know, that to me to do now!
Workers have told me that for trip to such country as Egypt, I should have cash money in hands, it should be not less than 2100 US dollars, I am simple in a shock now, I have no this money now in my hands and I can not show them this money, they have told that without it they can not put me in the plane, they have told that this obligatory condition trip to Egypt, airport Workers have told me that my ticket will work only within 3 days and during this time I should register it (to put down in it date a start and number flight) and at a start to show airport Workers 2100 dollars, but I do not know where me take this huge sum money, I have
Read more