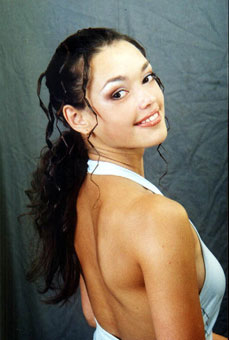 REPORT N1
David (USA)
hi, my name is david.
i have been writing to a girl in the baltic states for about 6 weeks.she is from belarus.her name is elena moroz.things were going pretty good until about 2 weeks ago.out of no where she says her mother is sick and she needs money.even though she hated to ask me.well i sent flowers and plan on sending money.however the flowers never did make it.they come back.so i did not send any money.she got upset and i have not heard from her in a few days. i dont know if she was for real or if she was a agency trying to take my money.i dont see her on your list so i thought i would ask if you had any advice .i have included a picture of her.she has sent many.
REPORT N2
Skip (USA)
My name is Skip and I am from L.A., California. I started to correspond with Elena, I found her on the "lovechaser website, but later found her on Americansingles.com. We wrote back and forth some 20 or 30 letters before it abruptly ended. Elena seemed very sincere from the beginning. Over a period of time Elena hinted at needing money to come visit me in America. She insisted she come here and for me not not to go to Minsk. She would not give me her last name or address for a really long time even though I asked her for them several times. I had a private investigator look for Elena Moroz and he could not find her anywhere. Her address is non-existent. Elena is so good at her deception, she would spend the money on long distance phone calls. I suppose this would be considered to be a small investment compared to the $2078 she tried to get me to send her and her "travel agent friend" for tickets, a $600 visa that are actually issued for free from the US Embassy to Belarussians. (there is a only $45 application fee).
When she finally realized that I would never send her money but would only buy her an unrefundable electronic airline ticket, and that she wouldn't get a dime from me at least until she got to the States, she finally gave up. She had to be very vicious about it though by ending with the most incredible love letter full of beautiful promises she never intended to keep. But, I got the last laugh because I never spent a dime on her!
REPORT N3
John (USA)
Unsolicited photo and lengthy letter sent to me. Later, instructions to receive street address and phone number of: Anastasia Polinina. Sent $20 WEstern Union for this. Then, no reply.