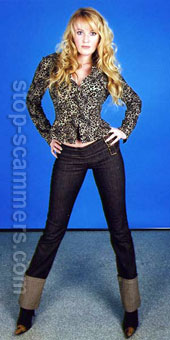 REPORT N1 (added on March, 29, 2005)
Sam (USA)
I am an American who lives in Odessa, and so I wrote her a letter.
She wants money to come to America. I told her I would give her taxi fare since she lives only miles away. She wants money for American visa to come visit me.
REPORT N2 (added on August, 21, 2014)
Karl (Australia)
I saw her profile on a dating site - can't remember which one although I have searched for it. She replied and we started communicating through the dating website pearlsofblacksea.
The lady who ran the dating website Irina Galayeva soon contacted me to let me know I would have to pay for Vera's translation etc if I wished to continue communicating, which I did. I sent them money by paypal, and this is how I know Irina's name and also Vera's (Veronika's) surname.
It was a real scam, which I soon found out when I went to Odessa to visit her. Irina picked me up from the airport in a late model vehicle,Toyota Landcruiser or similar (worth a small fortune by Ukraine income standards).
After taking Vera and her girlfriend who was the interpreter out to the most expensive restaurants etc for the first couple of days, I told the interpreter I wanted to go out just with Vera. We went out to dinner, she spoke broken English, and she was a lot better when on her own.
Liars should have good memories though, she had previously told me she didn't have a car but she always turned up in a late model car, far better than the average local drove. I think from memory she said it was her fathers. She also said she didn't have a boyfriend, but she was always on the phone to someone, every now and again... and I got the impression it was her boyfriend, keeping an eye on her and maybe wondering how she was doing (with the new "target"). Anyway, on about the 3rd day I told her "see ya later"!
Created: 2005-03-29    Last updated: 2014-08-21    Views: 1030