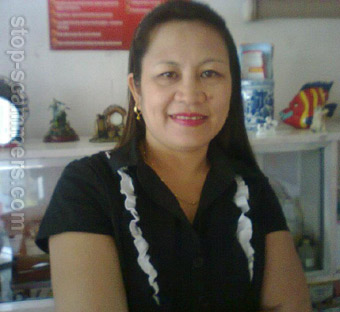 REPORT N1 (added on December, 24, 2012)
David (UK)
I found out that she just want money and stuff from me and from other foreign men. When you've been talkin to someone you tend to feel them whether they're sincere or not, gut feeling! At first, she told me about what happened to her, that a bad guy went to her store with a gun and took her watch, jewelry and money that she just got from the bank with her crying in front of the camera, we just talked and talked and because I pity her she looked sincere I told her to buy a watch and she told me she likes Bulova because that's the watch that she just lost and told her to buy her a ticket so she could come and visit me, after that she asked for watch for her kids, etc.. so I told to my self that this isn't right anymore, this woman just want money and stuff and go to UK or other country and just use me for her VISA so I confronted her and asked her and said that I don't trust her anymore and that she hurt my feelings all she want is money/stuff and visa so she could take her 3 kids with her. she was so mad, to make the long story short, she told me that I'm not the only man in this world, she could get a man better than me. She tried to make me feel jealous and told me that she found another man and his name is Richard, that the guy sent him the watch she wanted the Boluva watch, chocolates for her kids and of course! the money that she wants at least send her every week. I really pity the guy. she said he's an old *** man from Oklahoma, USA and he sends her money, poor old American guy! he's been fooled and I don't know if he keeps sending her money. The same strategy used, she would tell the men she's chatting that her store was robed, lost her expensive watch, jewelry and some money and crying in front of the camera. I know so.. because I was almost fooled by her if not my being careful. The last time we talked she said, she told Mr.Tollison that she her mole on her cheek is cancerous/malignant and that the cancer spreads to her nose and body eventually if not treated earlier, so the guy sent her money like around 200$ or 300$. Then the guy promised to send her again money for the medication. She would create stories, or if not tell the guy that her son wants a mountain bike but is expensive or she's ill or something or she wants to buy pets, etc.. She even mentioned to me that she is trying to convince him to invest a farming business. The old Mr. Tollison would send her money to finance her farm, and she would fly to America to visit him. That was the last conversation that we had before she blocked me on yahoo messenger. I tried to communicate with her to know what else she planning to do to other foreign men that she victimized. This woman scammer is greedy! she is heartless! i know there's Karma! she will reap what she sow! I just would like you guys to help stop this woman by reporting to Western Union, Xoom, moneygram, banks, etc.. to stop her from receiving money from foreign men. I pity those men that would be victimized by this greedy woman! AND SPREAD THIS TO OTHER sites that handle these scammers and banned them from receiving money etc.. Thank you and have a great day.
Created: 2012-12-24    Last updated: 2012-12-24    Views: 1294