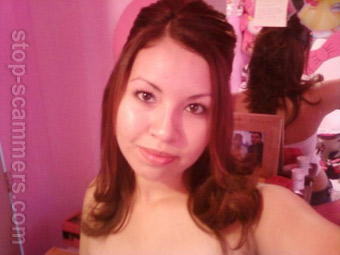 REPORT N1 (added on April, 18, 2013)
Nathan (USA)
Contact through SugarBBW website, although her information appears on several other sites as well. She claimed to be from Lilburn, GA, but reside in Newark, NJ and attend Rutgers University. Shortly after contact she began to ask for money, including money to travel to Nigeria to visit her Grandma. She claimed her Grandma was shot in the leg and needed medical help. Upon questioning her about all of her details, numerous inconsistencies and lies were discovered. She claimed to have graduated from Parkview HS in Lilburn, but a review of all school yearbooks for a ten-year period failed to locate either her name of her photo. She finally claimed to have been hospitalized with near-fatal malaria in Paris, France, and needed additional money for the bill and transportation to the US.
Created: 2013-04-18    Last updated: 2013-04-18    Views: 1229