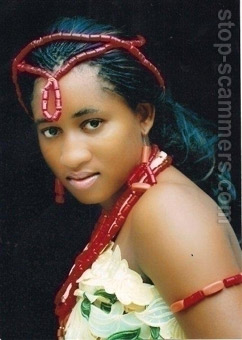 REPORT N1 (added on April, 29, 2013)
Mpumelelo (South Africa)
I was contacted by Miss Jenny Ilge. From rwanda. but she is living in a refugee camp in Dakar, Senegal. She inbox me on facebook... She wants to get to know me better. I responded with an email. And that's where she told me her story about her life and what happened. She sent me details of the bank, in London(standard bank). Where her late father( Dr James Ilge) deposited $6 700 000. I had to write a letter to the bank, stating that i'm her trustee friend, who will help her get the money. The bank responded to her and not me. The requested four documents which are the following; a power of attorney, affidavit of oath permitting me to claim and transfer the money into my account, the death certificate of late Dr James Ilge(her deceased father) and a copy of the deposit certificate of the account. She introduced me to a lawyer, who will get the needed documents for the bank( Dr Azeez Sheriff Mohamed), who is also from Senegal. The lawyer wanted $750 for the documents, that he stated from the high court. I haven't noted anything strange. I paid the money into a African union back. We were in contact from 03/03/2013 till19/04/2013. I went onto the web and type the name Dr James Ilge. Where i saw the same death certificate. So i sent them( Miss Jenny and Dr Azeez) that i found out it's a scam. I'm still waiting on a reply.
Created: 2013-04-29    Last updated: 2013-04-29    Views: 1349