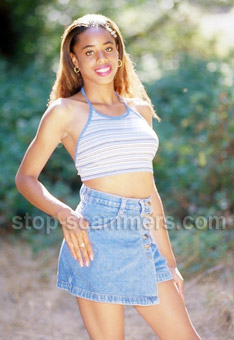 REPORT N1 (added on April, 6, 2005)
William (USA)
This person/persons female/male is a fraud who contacted me via Yahoo Personals and we began chatting via Yahoo messenger and emails. I was first suspicious of this person when she said she inherited 60 million dollars. Plus there were many other flags that popped up in many coversations from leads that I would drop during a conversation. I also did some checking out info she gave me regarding a supposed business her father left her after he passed away but could find or verify such information. I have continued on with this scam (scamming the scammer) because I thought it was/is fun. Ultimately, it is still playing out. She has sent me some US Postal Money orders with instructions on how to cash them.
They were determined to be fraudulent money orders and were turned over to the Postal Inspectors. I am waiting for the Postal Inspectors to contact me regarding the info I have been able to document on this scam and how it works. This is currently ongoing.
REPORT N2 (added on June, 8, 2005)
Charles (UK)
Guys,
A quick update on Rita. The photos you're using are from a **** site, where you can find the whole set - this is one good-looking girl!
I don't know if they're her or if she stole them or even if she's a she!
I wrote to her after seeing these and then your report. She claims to be very poor and she gave me a phone number, so I assume she is at least female, although I didn't call. I htought it might be a premium rate number!
Oh, by the way, she did want me to pay for her to come to the UK! So she is a genuine scammer!
She's about as honest as a second is long, so guys beware - dabble at your peril!
There are a couple of other email addresses that she gave me - one for her father and one for her sister - so that I could verify her story! No Idea who they are, but I can provide them if anyone is interested.
Here are the mail addresses for her accomplices - they're new.........

the name of my sister are Daureen in London,and victoria still single.the name of my father is MR.Dominic Ehilegbu and his e-mail address is mrdominic_60s@yahoo.com and my sister in London e-mail is issdaureen_ada@yahoo.com so you are free to mail them maybe inorder to know your in-law well if you care.
Created: 2005-04-06    Last updated: 2022-07-29    Views: 1271