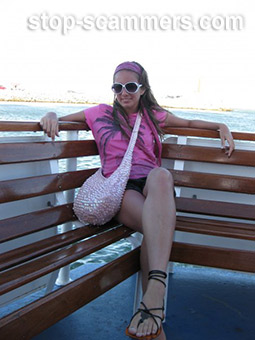 REPORT N1 (added on June, 7, 2013)
Andrew (UK)
I got talking to a woman on a website for meeting people, she has called herself Megan Smith. She says she is 30 years old and apparently was from Wales UK but claims both her parents died, her dad in a car crash and her mum of cancer. She says she's a fashion designer and that her mother is from Maryland USA. She kept chatting saying how she really loved my profile and how she just knew it was me she liked. She gave me her email address and I was suspicious. I suspected something was weird and I made sure not to give any personal information such as address or phone number or bank details. I've only sent a few photos that I'm sure she couldn't get anything important from. This girl was full of compliments and flattery and it was becoming more odd and quick for her to say how wonderful she thought I am.

Romance scam letter(s) from Megan Smith to Andrew (UK)
How are you doing today ?i really appreciate your response ,and sorry for late response,i want you to know that am new to this internet dating stuff ,but i believe things will work out the way we want from here and we can start a relationship,so i will like to tell you about myself ,i hope this letter finds you well...I was born in the year 1983 and that was when my whole family were living in Maryland,Am the only daughter of my both parents,Dad was a goldsmith in Essex and he is originally from United Kingdom,while mum is from the United State.I lost my Dad four years ago when he got involved in a motor accident,when himself and mum went to visit one of my family member,According to the officers that witnessedit,he said the car brake failed and dad couldn't control himself,so he died in his attempt to gain balance,anyway mum is yet to get over the shock of the accident,she was able to survive while dad died immediately.After dad`s death,i stayed with mum for sometime in Maryland,But when things were not easy as it used to be ,i had no choice than to move to one of our far relations who was there before her death was a fashion designer and hairdresser,through her i met so many people and she introduced me into fashion designing and female hairdressing and she was living at 59,noble street,wem,shropshire.I spent years in learning it from her,A year after i completed my apprenticeship,my mum passed away and i immediately caught up with life and sta
Read more