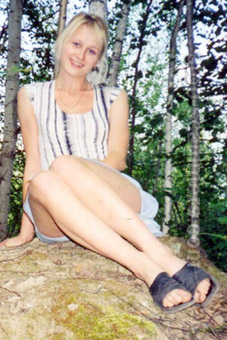 REPORT N1 (added on April, 6, 2005)
Adam (United Kingdom)
The photos (jpeg) emailed by this lady are not of her, but of a very pretty tall blonde. Scams involved asking for a birthday gift, giving the above address (not her own) to send it to, then asking for money for visa and flights etc. She claims she uses her computer at work. This "lady" is remarkably resourceful. She will try again and again to get what she wants (ie money), and will write everyday for six months, even though her English is appalling. She will turn up the emotional temperature and declare yearnful love for you, pick up on your likes etc and send you really cute pictures of "herself" (blonde) with cats, snow etc etc. - very very daring for someone with apalling English (It took me a course in Russian to understand her Russianised English). But she is quite cold and will scam you for $100's at a time. However, in exposing her etc, The British Embassy in Moscow has not denied that they have issued a visa to such a named person but they do not recognised the address or photographs. They also advised me against reporting the matter because the Russian authorities would not look upon it with any priority.
REPORT N2 (added on April, 8, 2005)
John (USA)
I wrote earlier about Olga, the gentleman that wished her name be removed from this site must be contacted, MacGregorK2. This girl told him exactly everything she has told me. I have pictures and letters. We started talking in late June 04, and yesterday basically called her bluff 2/9/05. She was suppose to visit over Christmas, but was unable because she needed more money. She was to come here for Valentine's Day, but I questioned about two girls using her parents address. Olga Shadrina, who by the way wrote the same letter to me about visiting the black sea with her father, who was a business trip. She talked about the setting sun.
MacGregor and I have the same photos. Her last email to me was about a class reunion, 2/8/05. The other girl Evigina Luzhnina, are both on stop-scammers.com. Olga needs to placed back on here. She is clever and smart. I think I should email Olga and ask her about MacGregork2, it's amazing that she still gets away with this. I told her, her and her friends were on a black list, she said that I was untrustworthy. This is not because she rejected me or other wise. I caught her in a flat out lie and she didn't know where to run. She's everything to me what she told MacGregork2. A dispatcher for and Auto-mobile Colum, she works for a trucking company. I mtself am a truck driver, she mentioned Lorries.
Lorries are trucks in Europe. She has an older sister Nastya, her boyfriend is Andrey. Her father is a hunter. Her grandmother died in Believe in Oct. She likes Russian bathes and goes in with her other Grandmother, this girl is clever. But like MacGregork2 I always felt that she sometimes was speaking to some one else. She talked about how she likes fishing as well. I never mentioned anything about fishing. I haven't gone fishing since I was a child. MacGregork2 said he has pictures of her sitting on a park bench, me to. He has one of her sitting on a rock, me to. I have one of her in a blue dress sitting with a girl, who looks pregnant and has black hair, another of her holding flowers in a park.I hope that Stop-scammers places her back on this list. I wrote earlier and put the wrong email address in. Sorry guys. I have some emails saved as well. Along with the ones I wrote. If some one in control of this site is able to get in touch with MacGregork2, please advise him of my report.
Thank you.

Emails from Larisa Mihailova to John (USA)
Hello, my Lovely Jack!I did not know, that you had relations with the Japanese woman. She was silly if she did not appreciate you. I promise, that I shall become bad never. I shall try to not disappoint your friends. How are you? I hope, that your trip is well. I have good mood. I hope, that my good mood will be such always. It is pleasant, that I could come back within my childhood. I have felt the young girl! And it is fair, that I did not recollect my first love. Ha. Ha. My first love did not come to Day of a meeting of graduates. 9 girls and 3 boys was in Day of a meeting of graduates. I was simply glad to see all. Jack, I went to Kirov yesterday. Please, do not abuse me! I could order air tickets only for February, 14. I should visit travel agency earlier. I have paid in addition 75 dollars. The employee of agency has told, that they have lost me absolutely. It is good, that the contract had continuation. I should receive air tickets on Friday. I have agreed with Andrey, that he will take me to Kirov again. Jack, try to send 600 dollars for the customs control at once as soon as you will come back home. Also try to not be mistaken in my data. I am afraid, that you may be mistaken in my data again. And we should hurry up. It is bad, that you are on road again. But I shall hope, that you will have time. I hope, that I shall not have any problems. Now I am sure, that our meeting is held. And I should not forget to buy a gift for you and your daughters. W
Read more