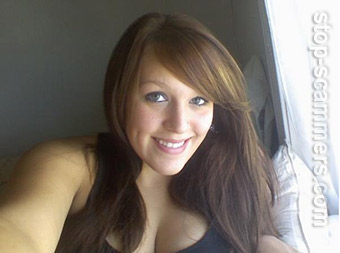 REPORT N1 (added on August, 6, 2013)
Scott (USA)
New scammer.
REPORT N2 (added on May, 28, 2015)
Dan (USA)
I have over 30 pictures of this individual with over a dozen different names in 4 different countries.
Claims to know nothing of all the other websites I have found her on, if it is a her.
REPORT N3 (added on July, 2, 2015)
Dan (USA)
She says she is in Nigeria with her daughter Kerry out of money but just received a 1.5 Million dollar check for doing some work down there but doesn't want to cash it.
REPORT N4 (added on May, 18, 2016)
Peter (Mexico)
I had originally reported this woman(?) under the name of Deborah Hassan because of the IP address's being the same. But i feel that she should be listed seperately. I have been talking to her for over 5 months now and she was to be here 3 different times. Left me standing in the airport the first time haven given me a forged itinerary of her flight, told me she had been in an accident and after i had sent her 300 dollars for the ticket and another 150 dollars for cab fare. We had met on chemistry and she approached me with a text me message and flirt on Thanks Giving Day 2015. She told me she was a nurse working for the American Red Cross stationed there in Mexico City was looking for sole mate and after talking for maybe two days total was telling me i was the one she had been looking for her entire life. The sauga continues right up till the time this is written and sent to you including two more times she was to be here, here sending me packages to be resent to her, or someone working with her, there in mexico city, packages included computers but mostly clothing from H&M online clothing store purchashed under a number of different names and card numbers as well as phone numbers.
I have over 10,000 texts of our conversations including fedex tracking numbers, money gram reference numbers, peoples names the money was to be received by, documentation on who actually received it.

Thanks for getting in touch with me ...i am very willing to chat with you one day so that we can talk more.......i am a cool and shy woman ..I hate cheating,lies and fighting ...my ex husband cheated on me so since then i have been single and i love to meet someone that is honest,open minded,caring, romantic and trustworthy.

I want to inform you that ever since you have been sending mails to me it has make me feel comfortable because when i read your mail it always make me to feel i can give you a chance to proof myself wrong that all men are not the same.Here are more information i like to share with you about myself and i hope you will like to read it all.

:English And a Little Italian