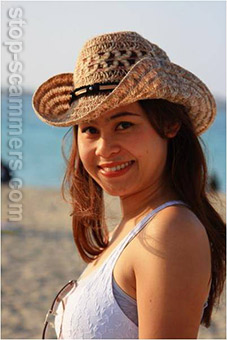 REPORT N1 (added on August, 29, 2013)
Neil (UK)
She initiated contact by placing me on her hotlist. After i browsed her profile and decided she looked plausible, I sent a message. She replied and immediately gave me her email address.
I corresponded with her for three or four long mails over a couple of weeks. She sent me four photos - very pretty, but looked amateur not pro (except for one). I checked them straight away and found no usage elsewhere on the Internet, so I relaxed a bit.
She claimed to be a recently-hired flight attendant with Etihad, working 2 weeks on / 2 weeks off, but couldn't spell the airline correctly. She then said she was based in Turkey for next 2 weeks, which I thought odd because although it is an Etihad destination its not exactly a hub of the network. But what do I know about the logistics of aircrew scheduling? (Subsequently I checked the IP address of that email and as far as I can tell it seems to have come from a Starbucks in Sunnyvale California.... coincidentally in the very same district as Asia Friendfinder website is based!).
She said she was half American half Malaysian but grew up in Malaysia. Luckily I have spent many years in Malaysia... I wrote to her briefly in Malay and she said she spoke it but didn't write it very well! I then asked where she grew up - she mentioned Miri in Sarawak, a fairly obscure small town - probably hoping that would satisfy my curiosity. Most Westerners don't go much beyond KL. But as it happens, I know Miri quite well. As soon as I said that, asking for more details, she stopped writing back.

Thank you for the long, detailed and interesting email, I enjoy reading through it. You write eloquently and with so much clarity and I know I will struggle to beat your letter, I'm not even going to try :) I'm glad we can communicate by private email as it will afford us a good chance of getting to know each other better. You have a very interesting and comprehensive profile or should I say bio but it's surprising that as much traveled as you are, you have never been to Turkey. This is also my first time here and I must say that I'm very impressed. I got here late Saturday but I'm just being able to write back.

About me; I was born in Malaysia to an American Father and Malaysian Mother and grew up in Malaysia. My Father was in the US Army and met my Mom who was a civilian Nurse in one of their military assignments. They got married but choose to settle down in Malaysia because my Mom didn't want to leave at that time because of her ailing P
Read more