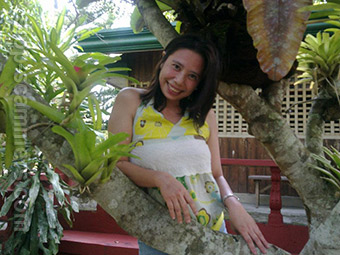 REPORT N1 (added on October, 16, 2013)
Brian (UK)
This lady was on the filipinocupid.com dating site and advertised herself has 28 year of age and when I said I was too old for her she said she was 33 and again after a few weeks chatting she said her real age was 37 as her father only registered her birth when her brother and sister was born? She stated she worked in a BDO bank in Kidapawan near Davao and only earned 18000 peso per year plus she could earn 3000 peso over time working until midnight? Our conversations were normal and she was very flattering and stated she wanted to focus her attention on me and that she had cancelled her name from the dating website. She kept dropping hints that her situation was bad there and she wanted to get away, she said she was always working by candlelight writing emails to me and her eyes were bad, power cuts were often where she lived, she didnt have a webcam but she could go to her sisters place on a sunday to let me see her there! She said her laptop was old so couldnt attach a webcam to it. My alarm bells were ringing at this time but I stuck with it and she eventually began hinting for me to help her buy a generator for her house at 15000 peso a time and a new laptop! I said I would try to help her with the generator and within seconds she said she had spoken to her sister (Venus Ong) and that she would buy the generator for her because Yang/Leah was too busy working? She proceeded to give me her sisters YM address and asked me to add her and to send the money to her direct as she worked in the western union shop! I never did send the money as my suspicions were aroused! The other night we got chatting and all of a sudden she stated she was going to be a Nun because I was not interested in a relationship with me now and that she was working late to save every cent to buy a laptop so I could see her morning and night! She was going to resign from the bank next month and that this was the last time she would chat to me? Within seconds of this she was offline and I received a YM message from her sister Venus stating that Yang was thinking of becoming a Nun and that the family was against it! We had only been chatting for 3 weeks! My theory is she is a cool manipulator that draws guys into her problems and if the guys are ****** enough to believe her she would change her stories to suit the way she was going to scam money out of them! I have received a few emails from her during the short time we have been chatting and they all sound well scripted and could be mass produced to suit any situation or guy that she might trap! I just said good bye and good luck in her new life as a Nun, I think she probably works as a team and because of the lack of finance coming from me, she has moved back into the hunt for other guys to scam? I hope that this information will help others if they come across either Yang/Leah Pelarios or Venus Ong? Thank you for reading!

Emails from Lea Pelarios to Brian (UK)
A blissful morning to you! Thank you once again for being open to communicate with me it is always an honor and pleasure to know you. I was quite emotional every time we are chatting I feel the world is so unfair. There are many bad people who plays the emotions of others but in return they are more fortunate and blessed. They found a good and loving person who loved them faithfully but I think we cannot question God for everything happens for a reason.

I do not give my email address to anyone this is my first time because I discovered many fakes and unreal people in the dating site where me met. I became cautious for fear that I may be victimized I only gave a try to you hoping and praying that you are Genuine. I can say you are a man with character and substance that rarely you can find now because of the materialistic world. People became busy searching for Happiness but they can never find happiness in any material things for it is innate it is from within. You are right no matter how rich you are you cannot buy love and happiness. You cannot buy a person to love you because love is always a gift freely given to us we do not need to ask.

You are very lucky because your wife left you a precious jewel a priceless diamond. As a man you are the head of the family a woman is the light her rays will shine if she live her commitment and role as a wife and a mother. I am also very family oriented woman who value love and family than gold. I am
Read more