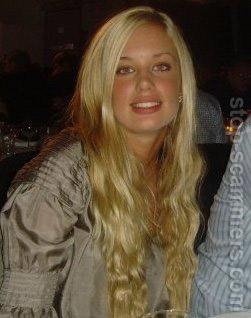 REPORT N1 (added on November, 25, 2013)
Iain (UK)
At first she did not ask for money. but after she went to Malaysia. she is still there as far as I know. she told me she imports gold for her business. she claimed customs ceased that. and she needed me to pay ?850 for her to clear that. but the next day after paying that she claimed she needed another ?1400. I said no way. but she keeps asking me. to help her.
REPORT N2 (added on December, 3, 2013)
Robbie (UK)
She is looking for a life psrtner, she lost her family, mum died from cancer n dad car accident, she is looking after her dad business which gold business, she is origin from nertherland n her mum was from france, she move to uk nearly 10 years n she is the second child of the family, her ex boyfrs rob her all her money, she is looking for a lifepartner. She send me mesg on love2meet .com. She has sent me the same pic which is on this web site blonde girl n different pic as if she being through a lot in her life, thank god I check on facebook I saw this pic n mesg abt her, she has email me 3 times, only mistake I did I have send her my pic.
REPORT N3 (added on January, 13, 2014)
Andy (UK)
Originally Aaltje, 30 from Cheetham Hill on the Stoke sentinel dating site.
REPORT N4 (added on June, 10, 2014)
Otto (Germany)
She came with the similar story to me than others have posted here already. Sadly, I must admit and I feel so ashame, that I believed her.
She has send me a couple of docments. She is using a british Vodafone Number at the moment. But this can be exchanged every time so I wouldn't publish the number.
I would be happy to contact others who were approached by her maybe we can help eachother...
I also tried to track the Phonenumber I got from her. But this is not so easy. If you know a website or a service which is really good, come back to me as soon as possible , she can put that simcard into the bin at anytime:
07537 158841
Your existing discription says this woman is in Malaysia? She gave me an account where to send money based in England, a Bank of Scotland account.
ALKIRK HOWGATE (R)
P O Box 17235, EH11 1YH, Phone: (870) 8500334,
Edinburgh
England
But the Account runs under a males name.
What else information do you want??
I would like to know where she is situated, really Malaysia, had to flee there because she has done crime here in the UK?
Thank you for further information and I would happy, if I can see the other pictures and documents you hold about this woman in your database, it may help me to investigate on my own a little bit. Results I would give to other vicitims of her.
REPORT N5 (added on July, 16, 2014)
Arron (USA)
Alid Greta is posing as a dating Mistress on a dating site. She said that she is new to that life style. She emailed me along with her passport and told me that she was real. She also gave me her phone number but nobody answered. She needed monies to start her ******* dungeon and that she would train people as a ***** and to live with her. I have the address to where you had to send the payment of 1,110$ which it was a male address;
Reciver Name: chris bolatsiron
City: white plains
States:new york
Zip Code:10605

Emails from Iris Anna Herma Ista to Andy (UK)
If you would like for us to get to know each other then feel free to drop me a line.My account is closing at the end tomorrow so it would probably be best if you emailed me at; janefitzzpatrick@gmail.com as I can pick it up then. I know it's a bit odd to give out the email address but I won't be able to access this site from the end of tomorrow. Hope you don't think I'm an od ball, I'm really not!

Hello Andy , may i just apologize to you that i haven't returned your mail to now as i was busy. My real names are Jane Fitzpatrick. Born in 1979.my father originally from Netherlands and my mother blood origin is France. my father live in Amsterdam and built his business there before we relocated to England some years back. I am second child of my parents and the only daughter of the family .I run a small business on my name after the death of my parent. My mother died of cancer and my father died middle of last year on his way to Netherlands in an auto car accident.My only brother live in Norway but it quite long i hear from him.. I had my elementary school and college in Amsterdam. I have been single for 5 years now because of the way guys treated me they came on my way collected my money and ran away left me with nothing but a hole in my heart.. I don't like digging to my past because it hurt me and i like to concentrate on my future because that is what important to me .. I belief in God and his existence. I am a lad
Read more