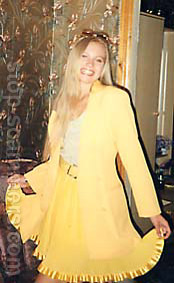 SHE IS A MAJOR SCAMMER. Please warn anyone who has contacted her, they may loose a great deal of money.

She has cost me $2000 in a wasted trip and about $500 in presents and cash. Lots of tricks, but the best one was cleverly built up over my 5 day visit. The crunch came on the last day when she said that she could only come to England if I paid her $5000 so that she could pay her ex (drunkard) husband to let her and her mother stay in their flat (which he still owned). Of course I did not pay, but she has played similar tricks on others with more Success.

I put a warning on absoluteagency.com as they will not remove her profile. An American named Ron contacted me immediately. He had sent her about $2000 without even meeting her. First for her "sick mother". Then for a new computer, then for flood damage etc. When he stopped sending money she became quite unpleasant.

Please would you let me know the action you have taken as I would hate others to suffer emotionally and financially as I have done.

Can you recommend any Russian authorities I can inform of this matter?

Emails from Olga Malenkova to Carl (USA)
DEAR CARL,,,
YOU CANNOT IMAGINE HOW MUCH I AM UPSET..
I HAVE SOME TIME TO WRITE YOU..
I TOLD YOU , MY CELL , IT'S JUST TERRIBLE ,, I WANT TO TALK WITH YOU AND MY BATTERY GETTING EMPTY SO FAST..
I WANT TO BE WITH YOU SO MUCH , YOU KNOW THAT,,, I JUST STILL DON'T UNDERSTAND WHY YOU CAN COME TO HELSINKI, THAT'S MEAN YOU CAN GET YOUR TIME FROM YOUR WORK,,, AND WHY YOU DON'T WANT ME TO COME TO USA WITH THE TOUR,..
PLEASE, BE HONEST,, DO YOU HAVE DOUBTS??? DISTRUST???
DEAR CARL,,, WE HAVE A STRONG AND SPECIAL FEELING TO EACH OTHER,, AND WE MUST BE COMPLETELY HONEST WITH EACH OTHER,...
I AM IN BIG TROUBLES NOW... I DO WANT TO ASK YOU FOR HELP..
. I HAVE A HARD CONVERSATION WITH MY NEW BOSS,, BUT IN SPITE OF THIS PROBLEM,, I STILL HAVE MY WORK HERE AND I NEED TO GET A DECISION IN NEXT A FEW DAYS,,, THE MANAGER OF MY CLUB IS GOING TO LEAVE THIS WORK , BECAUSE SHE HAS PRETTY SERIOUS PROBLEM WITH A NEW BOSS,, AND LIKE YOU KNOW , TO FIND A GOOD JOB HERE , IT'S A PROBLEM,, I CAN GET THIS WORK , I'LL WORK WITH MY GROUPS AND I'LL WORK LIKE A MANAGER OF SELLING MEMBERSHIP OF OUR CLUB TO CLIENTS.
BUT IT WILL TAKE ALL DAY AND I EVEN HAVE NO IDEA ABOUT MY WEEK-END, I THINK, I'LL EVEN WORK PART OF SUNDAY. YOU KNOW, I WANT TO DO THAT ONLY BECAUSE MY SITUATION WITH THE FLAT. MOST OF ALL , I WANT TO WORK LESS AND TO COME TO YOU...
DEAR CARL ,, I WOULD LIKE TO ASK YOU A BOUT A HELP.. I WOULD LIKE TO BORROW MONEY FOR RESTORATION OF MY FLAT FROM YOU,, IN THIS CA
Read more