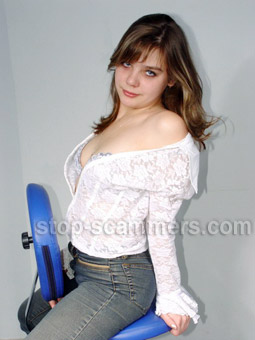 REPORT N1 (added on April, 30, 2005)
Ernest (USA)
This scammer wrote me out of knowhere for I have no posted profiles on any dating site. I knew from her first letter that she was a scammer. I wrote her back for I wanted to gather all the information possible so that I could report her like I have reported the 10 scammers before her. I hate scammers! I asked her where she found my email address and she answered that the worker at the net cafe gave her a list to choose from so she had no idea from where it was from. Anyway,I played along so well that she loved me by the sixth letter. She claims to be a doctor.
It's amazing how these scammers can fabricate such lies. I know she is new to the game for she made many mistakes; used two different names, answered very few questions, didn't want me to write her, didn't want me to isit her for it was cultural for the russian woman to visit the man first before he met her family, etc. I had a good laugh to say the least. The scam finally arrived in the form of visa, passport and airline tickets.
She wanted me to send her $1059 for the whole package. Well, I had to continue the hoax and agreed to send her the money via western union and even told her I would send her something extra in case she had any problems. I made up a fake 10-digit MTCN. I also gave her a fake last ame. I wish I could have seen her face when she was at the bank and they told her that there was no said money waiting for her. It would have been my reward for the time spent on my entrapment techniques. Ofcourse she rote me back and asked if I had made a mistake with the numbers and my name. I replied accusing her of being the worst scammer ever! In her last email she tells me she was wrong about me. I wrote back saying I was right about her!! That is my story. I'm not as good as the famous S.H. so I will call myself...S.B. (ScamBuster).
Created: 2005-04-30    Last updated: 2006-08-17    Views: 1157