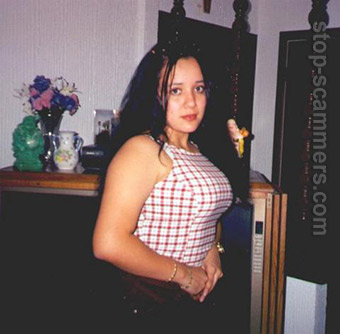 Emails from Angela to Paul (Australia)
Hi Paul, It's Goodmorning here, How have you been doing Paul, I really miss hearing from you as i know you must have been wondering why i haven't written you since i got to Cairo, Well am glad to tell you that i and my son got here safely, we had a long and a delayed flight, well it's a good thing we got here safely.

Paul the reason why i haven't been able to write to you since we got here was because I and my son were robbed on our way from the Airport trying to locate a hotel, we took a wrong cab from the Airport, we didn't know the driver was a member of a gang, while i was trying to tell him to help us locate a good and safe hotel, he diverted to a wrong direction, parked in a dark street and brought out a gun and immediately about 4men armed came out from an uncompleted building, they dragged me and Terry out of the cab dropped all our luggages on the ground, they pointed the gun at me and asked me where i kept my money and i pointed to my hand bag, they collected the hand bag and zoomed off. I and terry stood there for 15minutes before we met some girls who came to our rescue, they helped us to a nearby police station and then from the police station the police helped us to a hotel, I have been at the police station trying to make statements, The reason why i haven't been able to write to you all this while was because, since all the money on me has been taken away, I didn't have any money to pay for my room, so i had to use my computer
Read more