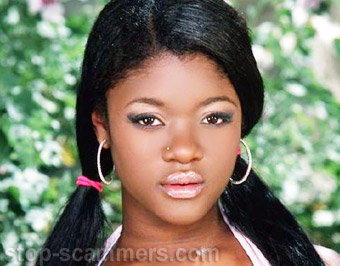 REPORT N1 (added on May, 11, 2005)
Maurice (UK)
I have been contacted by this Person and I have been writing to her and now she is asking for money:
"Dearest one, I am Miss Rose, I went through your profile and i love to meet with you please permit me to express my desire of going into a relationship with you,i have a business proposal for you i need trustworthy someone, if you are intrested email me direct to my private email so that i will give you the full deatails concerning the relationship. (roselinabo@yhoo.com) or call me +22508154718 Thanks Regards
Rose Abo."

For my safety and security of my future I am making this proposal to you for our mutual benefit. This however is not mandatory nor will I in any manner compel you to honour it against your will. I am Miss:Rose Abo, 22 years old and the only daughter of my late parents Mr.and Mrs. Abo. My father was a highly reputable busnness magnet-(a cocoa merchant)who operated in the capital of Ivory coast during his days. It is sad to say that he passed away mysteriously during one of his business trips abroad on the 12th.july. 2004. Though his sudden death was linked or rather suspected to have been masterminded by an uncle who travelled with him at that time. But God knows the truth! My mother died when I was just 4 years old, and since then my father took me so special. Before his death on july 12th, 2004 he called the secretary who accompanied him to the hospital and told him that he has the sum of Twelve million, Five hundred thousand United State Dollars.(USD$12.500,000) deposited in a bank here in Abidjan which he use my name as next of kin .

He further told him that he deposited the money with my name as the next of kin, and finally told him to tell me where to find the documents of the deposit which he said was in possession of his lawyer in sealed documents held by him and asked me to collect it from him and all the necessary documents to this fund. I am just 22 years old and a first year university undergraduate and really don't know what to do
Read more