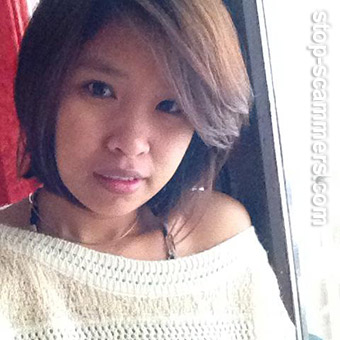 REPORT N1 (added on August, 21, 2014)
Yves (Canada)
I met her on DateinAsia site. I found on the Laos country side; I started relation ship because she had wrote in french my mothers language.
She accepted quickly happy to talk in french because she's speaking badly english.
I asked questions about her and said from me. She said to be divorced from french man and lived in France 8 years. She came back Thailand in 2010 when separed.
She lived there near my birth place. It was so strange, that's push up our relation. She send me pics from her in Evian les Bains i recognized very well.
I said living in Canada . She was excited and wants come to visit me. I said, i will go to meet her soon but she disagree. It's raining season in asia,you have another girl to meet, it's why you don't want i come quickly she said. She showed me be jaleous, and if i don't let her come soon, she will stay in Thailand.
After some days i accepted to wait her. She said to work on Laos border in duty free shop with small salary. She get one $100 each month with small room included.
I really had form of pity. She is french-thai citizen but said me her french passeport is out of use. She wants to get new one but not money for that. She ask me some help. She sent an old passport copy.
So, i accepted and send $200 cdn by MoneyGram for passeport, documents translation and transport to Vientiane(Laos) One week later, she sent copy from new passport. It was OK, no fake. I believed her a honest girl.
Some days later talking about ourself, she said how many days i can to stay in your country? How do i should have money in bank, i need also health insurance because i should show this document at border. We talked from that some days before.
But i need you send money for do that, i don't have for that.
I send her $300 cdn at her name.
From each side we was looking for better flight cost, i said on september we have good price, august too much expensive.
She forced me to do for august, doesn't want wait, and pourish in her town and job. She wants quickly visit me.
I asked all infos for name, address, plane take off day and times etc..
It was moment when three planes crashed.
She said me she's anxious. She prefer to buy flight tickets by herself and with her credit car. If her plane crash too, her parents will get insurance to help them because so poor.
I didn't want but at last i accepted and sent her $1100 cdn at her name by MoneyGram.
Between that, we talked about life and futur but she didn't answer all of my questions. I thought maybe anxious and prepared to leave for awhile, but no more.
When received the money, she said me flight ticket is more expensive now; we waited too long times. I agreed with her, it was upper than one week before.
She said have not enough, need $200 cdn more for ticket difference and another flight to go Bangkok airport.
International flight will start 10 days later.
She said why we do many transferts, it cost a lot, i forgot to give my bank account.
Then she gaves me her bank name, bank address, account number and her new address because stopped to work and stay again in Udon Thani.
I started to be septic, and don't want send.
pseudo Skype nutcharee.menchayaphum
Created: 2014-08-21    Last updated: 2014-08-23    Views: 1388