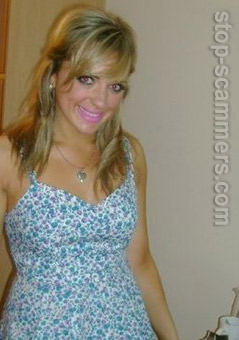 REPORT N1 (added on September, 29, 2014)
Harry (Netherlands)
First contact is laid by Hendrika Mary Sims. The contact came into being through the dating site: TEMPTATION-DATING. The contact lasted from 3 March 2013 to around 1 November 2013, 2014 and from 4 September to 8 September 2014. In the beginning the talks went normal and fun, about hobby s, food, etc. with sweet words towards each other. This has lasted about 1 month, without having talked about money. Our contact was through Skype and Facebook. I first received some normal photos of her and later received of her pics in bed , but with a Nightie to. She was at that time in Malaysia to arrange for its legacy of her late father. The legacy consisted of gemstones, diamonds etc. He had worked at a mining company, according to her as an engineer. The legacy was worth a lot of money and weighed 150 kg in brutal gems and diamonds. After about a month, she told that would come back to the Netherlands, where she had a home in the village Hoogezand. She only had not enough money to bring her puppy also on the plane. That costed 500 ?. I have that money transferred via Western Union. Afterwards there was all of a sudden problems with the export of the goods, and she had to stay there longer. I then transferred approximately 8,000 ? in different amounts for her hotel and expenses etc. Then she needed money to pay the costs linked to the surveillance company, where her stones were stored, money for special export permits etc. Everything with documents, which I have seen. Also needed money to bring over the stones to the Netherlands. 15,000 ?. This money I transferred to Alcom Freight. 05600316656 Bank account in the name of Akum Enterprice. I could follow the goods through track and trace to Singapore. By now I had already transferred a total of ? 80,000. Last transfer in May 2013. Then needed money for a special insurance for KLM. ? 20,000, for the goods. This money I never transferred, since I went too far and had no more money. After the month of May I found out through research that everything was lit up and probably fake. She was doing the same with other people, I found out on Google. I have kept in touch with Hendrika Sims, to see if I could get my money back in one way or another, talking to her if I didn't suspected a thing. Eventually, I went to the police on 7 November 2013 to report. She suddenly on 4 September 2014 took contact with me via Facebook and asked for ? 1,000, because she finally was in Netherlands from Malaysia. This money was meant to pay for her ticket to Mr A.O. Awoyode in Netherlands, which had advanced her that money supposedly. bank account NL63INGB0686746082. Also she gave me her Dutch phone number. The next day I passed this information to the police and hold her busy 3 days with talking to her , to let her phone to gauge. She has never taken up the phone, because she sat in Belgium at that time and had no money on her SIM card to foreign calls to be received. Only Whatsapp messages by internet.. I have never paid her, and after 3 days having contact with her, I broke the contact and blocked every kind of contact, like Facebook. There are even more people approached by her, which I have been able to track by her Facebook. A few of them has paid also big amounts to her. The data of these people I have in my possession. The first money transfers went on her name and then went to various other people in Malaysia, because she was after a time blocked by Western Union, because she too often money got transferred. Names other receivers: Angel Dora,Juliana Daniel, Tom Meyers, Felix Cyrus, John Elwood, Alfred Tony, Esther Phillips, Alonso John and Hendrika Sims.
Currently, Hendrika Sims is still working on a lot of people and must be stopped.
Her IP is 157.55.2.76
Skype name hendrika sims
Full name Hendrika Mary, SIMS
American passport. Number: 009072740, New Jersey, United States, 24/9/2008 DATE OF ISSUE, AND 23/9/2018, Date of expiration.Date of birth, 30 June 1978, New Jersey .