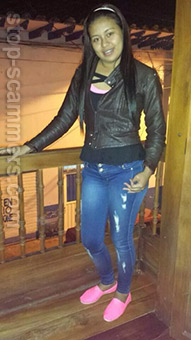 REPORT N1 (added on December, 2, 2014)
Michelle (New Zealand)
After a series of money transfers over the past 4 months of total is dollars 12.000...
It first started after Mary claimed to have fallen down some stairs and required money soon after for a new phone $500 She said that from dec 1 she was due to inherit 300,000 from her parents inheritance, however needed to pass her uni degree.
Asked for 3,500 to assist pay uni fees as direct payments stopped suddenly.
Asked for 2000 to book flights to Aus
In late November after course finished as she claimed to be on a course trip in Nigeria with class mates.
Required a further 1000 for what she claimed was an international travel Allowance to be entering Aus.
Day before due to fly:
requests to see flight and passport had been avoided by her for weeks.... Claiming they were locked up in the course co ordinaries safe....
Mark makes contact requiring money for new passport as her passport was too close to expiry to leave to come to Aus...another $700 sent...
To who she claims was a
Man working at airport to help her.
Then wanted more $ one day before re- scheduled flight for a domestic flight...off $200 which was declined.
Then day of arrival to Aus was a no show .....
Tried to last moment even said was on plane and fastening seat belt...
After realising the scam
Made contact to the one and only FB friend of Mary's (although Mary had 2 fb profiles shut down...Lotitta Angelina Bobetris This Friend offered to help...
(But had to send a further 500 us$)- this was last week! November 2014
The friend had posted on her wall the photo of Mary (only one on her wall) I wish to add thatname of fake friend please..
It is the Loritta Angelina Bobetris
Who surprisingly up till recently also
Had the same Dob as Mary Angelina
There is a definite connection between these 2 fake profiles and should be noted...most likely same person.
Both profiles had only been created in 2014 and Lotitta FB account only has men from around the world which are at risk of becoming a victim ...
And u will see a photo of Mary on the wall and only copied and Pasted love quotes...