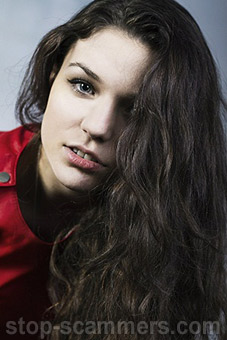 Emails from Ekaterina Fedorova to Mike (USA)
Hello there! How are you? I'm glad that I met you on a dating site and get your responce this evening! I deleted my profile, because i don't like dating sites:) or probably I do something wrong. And I should admit that I feel uncertainty :) But I nevertheless hope that your heart is open for new friends, and I know that right now I must write at least the most important things about myself. Well, You know, my name is Anna. My height is 169cm (I think it is 5,7 feet). Did you think I am low? Or not))) My weight, if I'm not mistaken - 118 pounds. I'm 28. My birthday is April, 29 I was in relationship for 2 years. I have no kids and at present live alone by myself, that means no boyfriend, what is about you? Now I live in the Russian Federation. But I lived in the Usa Wyoming the city of Laramie for some time.
I trained and worked in a dentist area. I am a dentist.
If it is interesting to you, I shall speak more about it. I aware that Russia maybe too far away from you, but I think it will not be a barrier.
And probably soon I shall travel again. Now I live in a little town in a central part of Russia, the city of Yaransk, Kirovsky region.
mmm... yes I like to travel.I visited different countries.
I shall speak about it later. I think it's great to have some friends who live in the other parts of the world. Do you agree with me?
And I sincerely think that for friendship there are no borders or distances. But enough about it. I feel that I shou
Read more

Emails from Ekaterina Fedorova to Kevin (Canada)
Hi !!! It's me Elena.
I'm glad to see your fast answer !! :)
I must tell that I try to write in English as good as possible (within my knowledge). I hope you understand all what I write:)
I have been already studying English some years, Therefore I apologize for my mistakes :).
At school I wanted to be a english singer and even finished a musical school.
But I sing songs during my life just for myself )
also I play the piano. do you play any musical instruments or sing? :)
Well, I work in a medical field.
After 7 years of studying there I received an red diploma.
The Kazan State Medical University.
Best diploma is called red in our country ;)
I have been working as a Pharmacist for 5 years, I like my job in spite of the fact I have to work a lot. Also I have interesting seminar trips to many places. I go there to get my work experience.
Once I was offered a training course in Canada, and I agreed.
It was a good chance for me to see the world. In Canada I studied English.
Then I decided to work in English speaking countries. It's a good experience for me. Also it's very interesting. But half a year ago I returned to Russia. It was necessary to settle some questions.
And Now I work in a local clinic in our town. I like Russia but I have ideas to move to a more stable country. The life is very complicated here.
I know it will not be easy in a foreign country. But I am sure I can do more, than do here. Besides I have some experi
Read more

Emails from Ekaterina Fedorova to Manuel (USA)
Hi Manuel , How are you doing my darling? :) By the way, I often begin to imagine - what you do, where are you right now, or with whom you are right now...
There are a lot of kilometers, some hours between us, but I always think that maybe right now you also think: "What Elena is doing, where she is?".
And maybe we think of the same things at the same time. I like thinking of it.
Yesterday I came back home from work earlier. I spent time reading, walking, cooking :) My brother came to my place after work. Oh my prince, apple pie I cooked yesterday was great! Nikolay took the half home to have breakfast with tomorrow. There was a very funny situation, Nikolay went to have his hair cut and when he came for supper the most part of his hair has not been cut and other part was cut very short! I laughed and Nikolay was not able to understand what had happened :) you know, it seems like that that hairdresser was not able to done his work well because of holidays, maybe drank too much or just was too tired :)) Well, you know, I can cut hair very well and did it with Nikolay's hair, he is handsome now and happy. May be someday I will cut your hair also:)) Nikolay said hi to you!
You know, Nobody here is surprised if the woman looks for ''not here'' man . I think the cultural distinction is a wonderful thing. I don't understand men here and their culture of dialogue with women. They are not able to appreciate women's feelings, her fidelity, love. They
Read more

Emails from Ekaterina Fedorova to Paul (France)
Hi, my Paul! My dear, excuse, for a delay of the answer! I even do notknow what to tell first. I simply hope that you will be happy! The mostimportant, finest news - I did it! I got the visa! I am very happy Paul!!!!
My prince I have not stopped on it and later we with my girlfriend at whomI have stopped in Moscow have gone to office of this airline, company thatreserves airway tickets. I asked them how I can reach Le Grand-Saconnex, Switzerland and howmuch it costs. They've told me that the roundtrip flight to your airportcost 1187 US dollars. It was too expensive for me and I'veasked them to find the cheapest variant. And they've offered. It would beon the January 25 I have learned, that cost of tickets up to in one party willmake 385 dollars, I was wondered if it was possible to reserve a ticket andto pay for it a part of the funds this time and the other part later,because other people can buy the cheap ticket and I'm not. But they'verefused and I was in despair! I've asked them to help me so long time thattears have come to my eyes! And they've agreed! I have learned, that now returntickets are necessary for the proof of that I independently can return to Russia.But there is an opportunity to change return the ticket on money in yourcountry, or to change date. To me have told, that if will take returntickets the discount at a rate of 5% is given, it turns out that385+385=770 dollars and will subtract 5% these are that willmake 770 dollars,
Read more