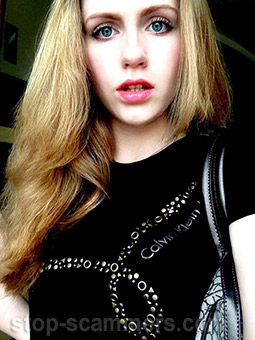 REPORT N1 (added on January, 14, 2015)
William (USA)
I was contacted by this woman on Russian Cupid in September 2014. After a couple messages she asked for email address. After a couple emails she wanted to go to Skype Her name there is (tamara.kutova1) Nothing really happened at first, then she started Skype call on a daily basis. No I love you right off the bat. She is slow and kind of drags you in. She is supposedly a teacher there and is afraid of the war and wants to get away. Then Skype went to phone calls, usually from me to her. Then after a month or so , she wanted to come here and only needed 1000 dollars for it all to happen. She sent documents as she received them. Then for her visa she needed to provide financial responsibility to come to the United States (Which I checked and is true) So sent another 2000 dollars in November. Everything was in place. Then she called and said her father was hit by a car while crossing the street and needed medical attention, and doctors there will not provide unless paid first.(I looked this up also and it is true) She was crying uncontrollably and said how she hated the Ukraine and their ways. So I sent another 1000 dollars in December. Now all was well and she was coming here in January 2015. But now she needed 400 dollars for train fare and hotel before her flight. I had that information sent to me as well. I checked all the flights and they were legitimate. But the day she was supposed to leave, there is no answer to Skype, email, or phone calls...And she didn't arrive on flight. She has 26 contacts on Skype, so I believe she is doing the same to others as well. BEWARE of this one...She is smooth. So 4500 dollars total.
REPORT N2 (added on February, 11, 2015)
Archie (Italy)
Wanted 1,000? for visa, passport and flights.
Checking on this site I see she has done this scam at least once before.

Emails from Tamara Kutova to Archie (Italy)
Hello my beloved one. Thank you very much for your letter honey. Well, sweetheart good that we slowly sort everything out and move to the preparations of our meeting. I really feel that I am so lucky to have you in my life. I am really glad that I have such a man who loves me and cares about me so much ; )) Thank you a lot for that. Well, yes my dear I see your travel plans and I would be able to come to you there by the 8th of March if we start to prepare my documents already now ))
My dearest, it is surely not a problem for me to send you my Ukrainian ID ) It is all right, I attached it ; ) So, my dear, yes I also found out that I would need to take it with me when I will pick up the funds.
So, there you can see my info on the Ukrainian language
My full name there is Tamara Kutova
my address there is Ukraine, Khmelnitskij region,Izyaslavskij region, Ternavka village, Tsentralna street. 22.
Well, my love as for the costs, the International passport is 300 euro. The visa is 289 euro and the double way ticket is 400 euro. Here we go )
Thanks a lot that you are with me and that you take care of me and I really care about you too, so badly, you are the best man in the whole world!
SO,talk to you later today!
your loving Tamara