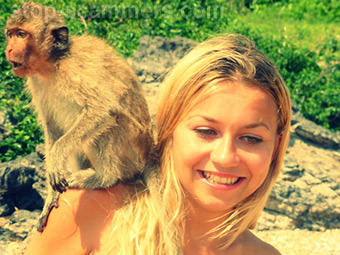 REPORT N1 (added on February, 27, 2015)
Joe (USA)
Same as all the other scammers.
REPORT N2 (added on April, 1, 2015)
Will (Belgium)
This person contacted me on Feb. 22, out of the blue in an email not even addressed to me, a few weeks ago, said she lived in Mississauga, ON, was from St. Petersburg, and had been working in Canada for five months. We exchanged emails about two or three times a week; hers became increasingly passionate, with talk of love at first site, and that I was the man of her dreams. The oddest thing about this was, that she rarely if ever actually any questions I posed in my emails. Eventually we made arrangements to meet in Ontario in early May (I already knew I would be in the area), but she kept insisting it be in early April. Then she suddenly had to go to St. Petersburg to help her mother and sister buy the apartment they lived in. Supposedly she was able to turn in the return part of her airline ticket which raised the last $2000 (US). She was booked to return on April 4, and I agreed to meet her at the airport. Now she needs me to buy her a ticket back to Toronto (but it has to be a return ticket).
REPORT N3 (added on September, 29, 2016)
Bill (USA)
Have recieved many emails corresponding back and forth. Claimed to be in Canada and was looking for a relationship. gave me her phone number. Phoned and chatted but As soon as i said I would fly to see her in Mississauga she suddenly said she had to rush home to Russia to see sick mother. Asked if I could help with funds to send her home and asking for money for her sick mother, to save her life, also for her unpaid late utilities asking me to send money via her sister, her aunt, her mother etc. Asking for thousands of dollars and promising that as soon as debts were paid she would be free to travel back to Canada.

Emails from Svetlana Trunova to Joe (USA)
D-gay! How is it going today?
I want to know you better.
We might take little steps or giant miles on the Internet where you do not normally have the same solution when you see an individual at a club or a singles' bar.
Actually between the loud soundtracks, alcohol, smoking and crazy audience packed in like sardines, most of the time you don't meet anybody 1. get a incredible headache 2. lose of your hearing 3. breath in a bunch of toxic cigarette smoke 4. drink alcohol just to make the time pass while damaging your liver and brain.
So I prefer the Internet even though it is the first time I'm applying it out to see if I can find my future soul-mate.
About me, I'm Svetlana, I live in Canada. I have a good job.
I'll send you a picture if you want, just let me know.

If you need my answer Please answer only to my personal mail: notjustpretty@yandex.com

I am waiting for your response.

Emails from Svetlana Trunova to Will (Belgium)
Morning! How are you today?
I want to know you better.
We can take baby steps or giant steps on the Internet where you do not always have the same option when you find an individual at a club or a singles’ bar.
Actually between the loud sound, alcohol, smoking and crazy audience packed in like sardines, most of the time you don’t meet anybody 1. get a incredible headache 2. lose some of your hearing 3. inhale a lot of toxic cigarette smoke 4. drink alcohol just to pass the time while damaging your liver and brain.
So I prefer the Internet even if it is the first time I am applying it out to figure out whether I can find my future partner.
Some info about me, I’m Svetlana, I live in Canada. I have a good job.
I’ll forward you a photograph if you are interested, just let me know.

If you need my answer Please answer only to my personal mail: andinmydreams@yandex.com

I am looking forward to your answer.

Wow Bill! I have received your letter and I am very happy about it.
I like to make new friends.I believe that one of my friends can become my future partner. Thank you very much for your answer. Now I see that you are interested in communication with me.
Now I wish to tell you a little bit about me and my life. I was born in Russian Federation, where most of all men are heavy-drinkers. But now I live and work in Canada for 5 months. I am 30 years old. I was bor
Read more