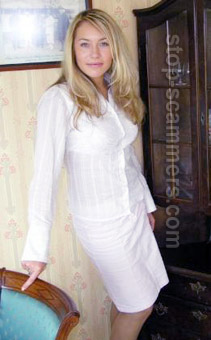 Emails from Nadezhda Chepaykina to John (USA)
Hi my love John!
This letter from "lucky" lady. Why "lucky", not lucky?
Today I've got bad news from hospital where Anna is treated. The attending physician has told, that Anna urgently need in replacement of a kidney.
I have been very much grieved. I cried. Doctor has told me, that surgical operation will cost 900USD. My love John, I have paid 710 USD for Anna surgical operation.
It is a part of that money I've saved for my trip to you. Today I went to visas firm. I was told that my visa was ready at last, (I send you it's SCAN). I was most happy the person at that time. But this firm not only makes visas, it also reserve tickets. I decided to use their service again. I was told that the flight to Washington costed 890.70 USD.
It was too expensive for me, and I asked them to find the cheapest variant. And they offered.
It would be on the On April, 8. and cost 700.50 USD. I wondered if it was possible to reserve a ticket and to pay for it a part of the money this time and the other part later. But they refused and I was in despair. I asked them to help me so long that tears came to my eyes. And they agreed. I wasted all my money, but it wasn't enough. So I went to pawnshop and pawned silver and gold embellishments which I had from my Irina . I got 150 USD and that was enough for initial payment. I have paid in whole 350.50 USD.
It was my last money. The number of the flight on which I resevered the ticket is 7:15 am Depart Moscow (SVO) Air France 25
Read more

Emails from Nadezhda Chepaykina to Windy (USA)
Hi my prince from a fairy tale! Hi my king from a real life!
Hi my beloved Tony!
Thanks for your letter. I am very glad. I now always cheerful because I think of you. The thought about you warm me.
Yesterday there was an awful night.
At night when I already slept, I have heard some squeak. Someone tried to open my door. I have heard that someone tries to open the lock in my door. I very much was frightened. I did not know what to do. I have risen, but could not pronounce any word. I very much was frightened and afraid to approach to a door. Legs did not obey me. Me as though has paralysed. Then this sound has disappeared, but the one who was behind a door apparently began to try to break a door. The tree crackled and crunched. I have begun to cry and did not know what to do. I always counted myself courageous, but during that moment I have become puzzled. The door already has almost opened, because the door-jamb has already broken. But then suddenly all has stopped. Probably he was frightened off by someone. I sat on a bed and have been very much frightened. I have included light.I knew that if someone will want to ********* into my apartment, I cannot call somebody to the aid at all because I at all have no phone. A door in my apartment very old and not strong.In our village very much frequently plunder apartments. And not only when owners are not present a house but also when an at home somebody is. It is enough to open a door. Plunder in masks. It d
Read more